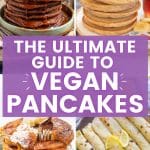 The ultimate guide to vegan pancakes! Get all of my best tips for how to make the best dairy & egg-free pancakes that still taste amazing!

Everyone deserves perfect vegan pancakes and I am here with my tips and tricks for getting it right every single time.

In this post: Everything you need to make amazing vegan pancakes.
Use this menu to jump to the section you are interested in:

If you've ever wondered if it's possible to make vegan pancakes and want to learn how to make them without eggs and milk, or you have had an epic vegan pancake fail, then this is the guide for you. I'll be giving you all of my tips and tricks for the best vegan pancakes as well as the common reasons they can go wrong and how to avoid it happening to you.

I take my vegan pancake game very seriously and have my technique perfected, as you will know if you have ever made any of my pancake recipes. I'll be sharing some of my best recipes for vegan pancakes at the end of this post.

Making perfect vegan pancakes is easy if you have suitable equipment and a good recipe. My must have pancake making items are:

How to make vegan pancakes without eggs and milk

It is really easy to make pancakes without eggs or milk. The milk is the easiest component to replace. Simply use your favourite non-dairy milk instead of regular milk. Any will do although I recommend you use an unsweetened and unflavoured one if you can. Homemade milk like my almond milk, cashew milk or oat milk are fine to use as are storebought non-dairy milks.

It's really important to remember that eggs in pancakes don't just bind. They also provide leavening along with the baking powder that is in the recipe. That's why when you replace the eggs in a traditional pancake or cake recipe with many of the vegan substitutes, you won't get such good results. When replacing the eggs you also need to replace the leavening they would produce and most vegan egg substitutes don't do that.

By using this combination you replace the leavening that the raising agent and the eggs would otherwise provide and your results should be just as good as they would be with a batter made with eggs.

Of course getting the measurements of each of these exactly right is incredibly important so I always recommend you follow an already vegan recipe with good ratings, rather than trying to convert a non-vegan recipe. That way someone else has done all of the experimenting for you and you are more or less guaranteed a good result as long as you follow the recipe exactly.

Commonly used vegan egg replacers like chia seeds, ground flaxseed, applesauce, vegan yogurt etc will not replace the leavening that eggs provide so your results will not be as good if you use them. Many of these also add unnecessary extra liquid to the recipe which will affect the texture of the finished pancakes unless you adjust the amount of milk being added too.

How to make vegan pancakes fluffy

Vegan pancakes can be just as fluffy as non-vegan pancakes. Just look how thick and fluffy these are:

It's no wonder these are my most popular pancake recipe.

Here are my tips for getting the best and fluffiest vegan pancakes:

How to measure flour

One very common mistake people make when making pancakes is not measuring the flour correctly. Using too much or not enough seriously affects how the pancakes turn out.

The number one reason this happens is that they use cups to measure the flour. Cups are not an accurate measure of flour and it is impossible to get good and consistent results when using them. Every single time you fill a cup with flour you will have a different amount/weight in there. Sometimes up to a third more than the recipe intended.

Weighing is the only way to make sure you get the same amount every single time and it's a gamechanger for pancake and baking recipes. Digital kitchen scales can be really inexpensive to buy. You can pick up a decent one for under $20.

Why it's important not to over mix the batter

Another reason pancakes don't turn out well is over-mixing of the batter. Flour contains gluten and when liquid is added to flour and agitated you activate that gluten. The more you mix the batter the more you develop the gluten and developed gluten is not your friend if you want super-soft, fluffy and tender pancakes.

Also when mixing too much, you deflate air bubbles in the batter. Stirring gently maintains as much air as possible which as a result will make your pancakes lighter and fluffier.

There is a really fine line between mixing just enough and mixing too much. If you do over mix the batter your pancakes will turn out thinner, less fluffy, heavier and a little chewy.

If you've ever wondered why pancake recipes ask you to mix the dry ingredients in one bowl and the wet ingredients in another, here is your answer. It is to help you avoid activating the gluten too early and overmixing the batter.

The aim when mixing batter is to combine the ingredients by mixing or folding as gently as you can until your ingredients are just incorporated and there are no dry or floury bits remaining. Stop as soon as you reach that point. Some small lumps are fine. You shouldn't spend time trying to beat them out because then you will be developing the gluten more and more and deflating air bubbles in the batter. I promise you won't notice them when the pancakes are cooked. I try to mix my pancake batter in 10 or fewer strokes.

In a recipe like my vegan banana pancakes where you can make the batter in a blender, the same applies. Don't over blend. Use a fairly low power setting and blend only until you can't see any dry flour. Don't leave the blender running past that point.

When to flip pancakes

When making pancakes it is important not to flip them too soon. Here are step by step photos of a pancake cooking:

Only flip the pancakes when bubbles have appeared all over the surface and started popping as demonstrated in image number 6. You can see that all of the bubbles around the edges have popped and look like little holes. Doing it this way ensures that most of the bubbles inside the pancake are set enough to not burst when you flip it which in turn ensures you get fluffy, airy pancakes.

How to avoid gummy vegan pancakes

Over-mixing, not resting the batter, cooking too quickly, not making the pancake batter thick enough and not using a good recipe could all be reasons your vegan pancakes come out gummy.

To avoid it happening again follow all of the tips in this post and give one of my vegan pancake recipes a try.

Looking after your pancake pan

Try not to ever use spray oil like Pam in your non-stick pans or waffle irons. These sprays are not pure oil and have ingredients in them that leave an invisible coating that is impossible to remove by washing. This residue will quite quickly render your non-stick surface ineffective.

If you don't want to add too much oil to the pan, pour a drop of your oil of choice onto a piece of kitchen paper and swipe that around the pan, or buy a spray bottle that you can fill with oil yourself. You'll be amazed at how much longer your non-stick pan lasts!

What fat to use when cooking pancakes

If you have a great pan that you look after well you don't need much grease at all when cooking your pancakes. If your nonstick surface is really good you can often get away with using none at all.

Use a heatproof pastry or silicone brush to swish the oil or butter around the pan, or carefully use a thickly folded up piece of kitchen paper to wipe around the pan, but be careful not to burn your fingers.

How to keep pancakes warm

If you don't want your pancakes to go cold while you're finishing up cooking the entire batch, simply turn your oven on to its lowest setting and put a plate on one of the oven shelves. As you cook the pancakes, slide them from the pan onto the plate with a spatula and they will stay nicely warmed until you've finished up the cooking.

What to serve with pancakes

My favourite way to eat vegan pancakes is with a generous amount of vegan butter and lots of real maple syrup. Other things that go well with pancakes are:

In the unlikely event that you have some leftover pancakes, you can wrap them well and keep them in the fridge for a couple of days or freeze them for up to 3 months. Reheat them straight from the freezer.

To reheat pancakes you can pop them into a skillet or frying pan over medium-low heat until they are heated through. You can also microwave them for about 30 seconds (a bit longer if they were frozen) or pop them into a toaster for 1 or 2 cycles.

So now you've read all of my tips it's time to put what you've learned into action with my best vegan pancake recipes: 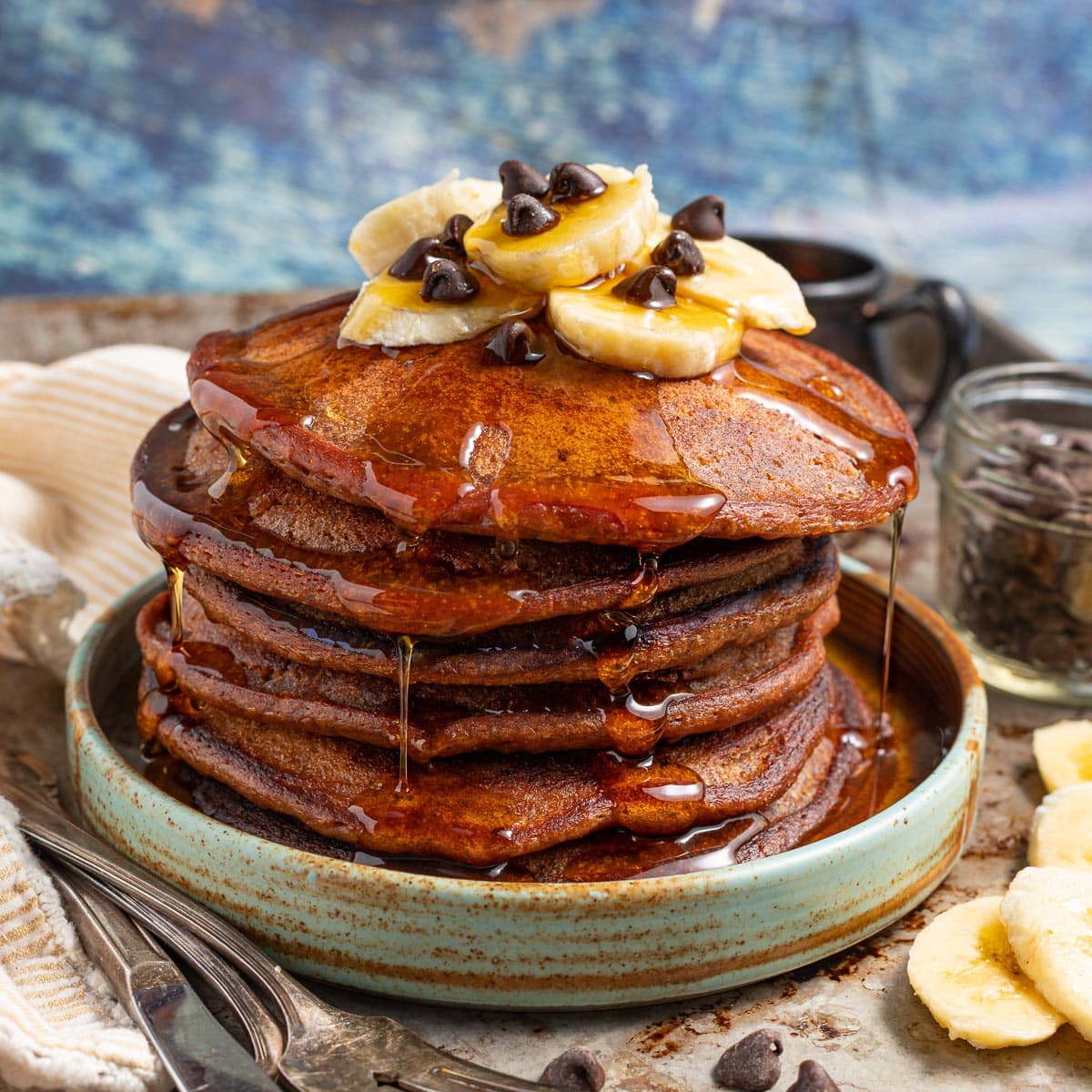 Treat yourself to a stack of my super soft and fluffy Chocolate Banana Pancakes for breakfast or brunch. They are melt in your mouth delicious with amazing, rich banana chocolate flavour!
make this recipe 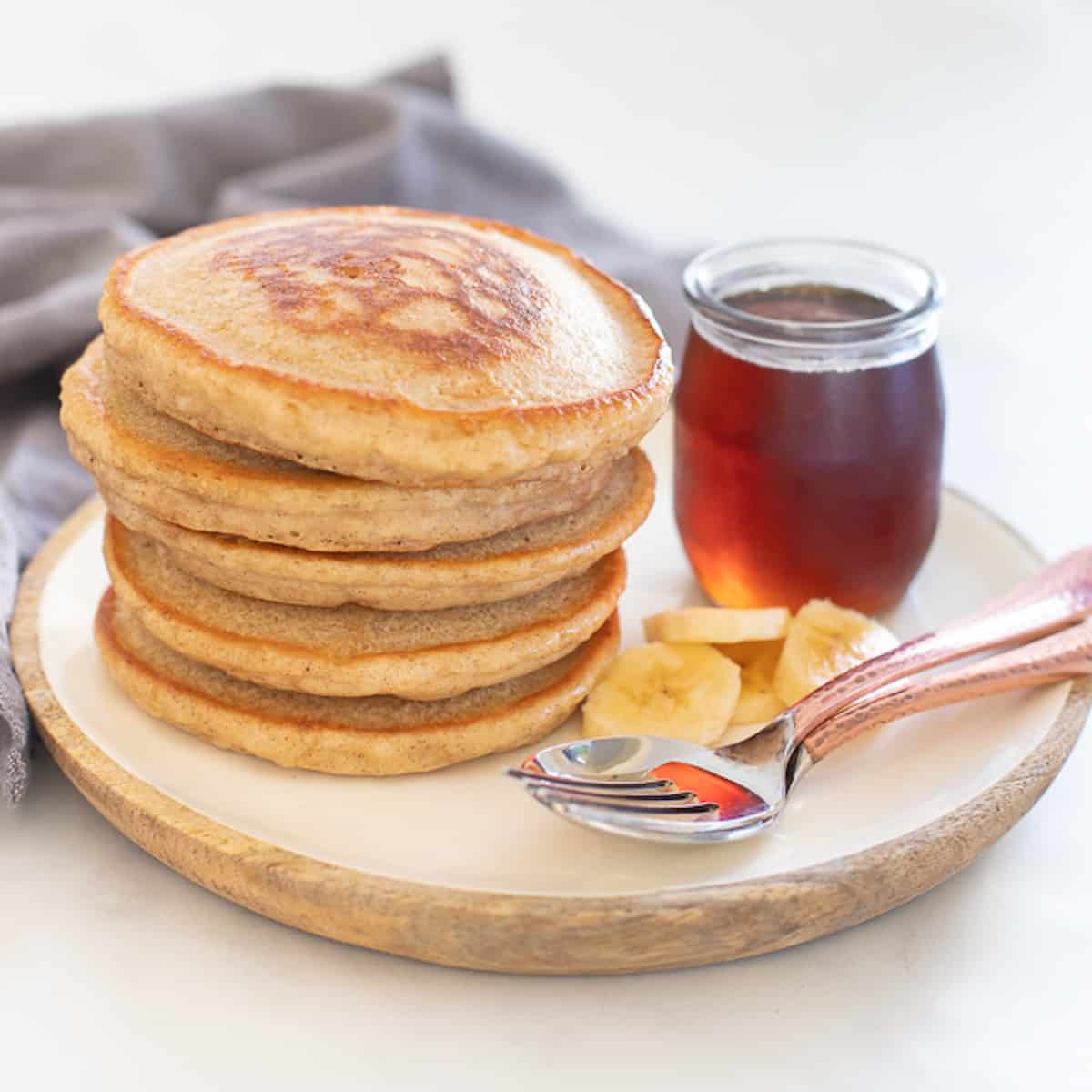 Hands down THE best Vegan Banana Pancakes. Made from pantry staples, they are quick and easy to make and so soft and fluffy!
make this recipe 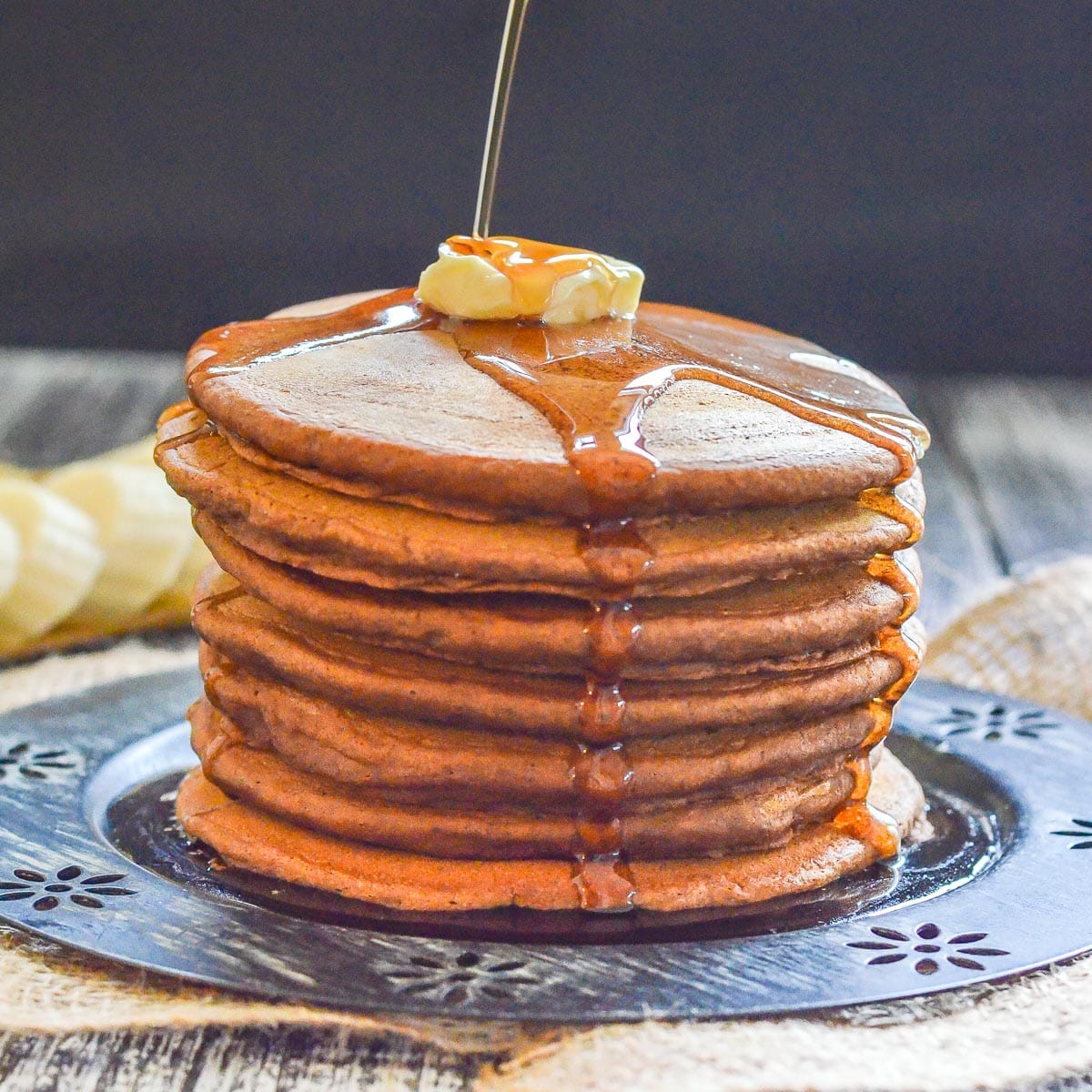 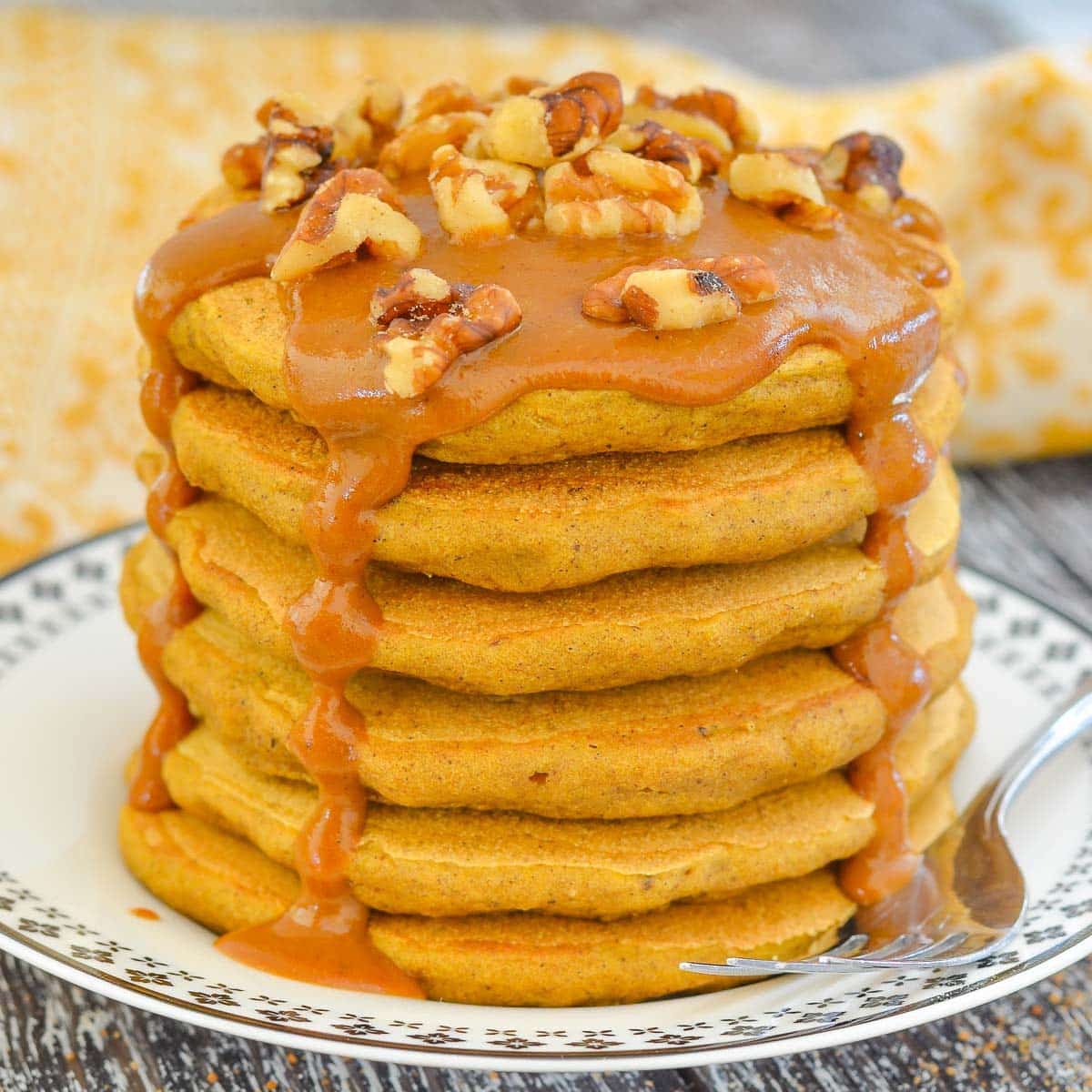 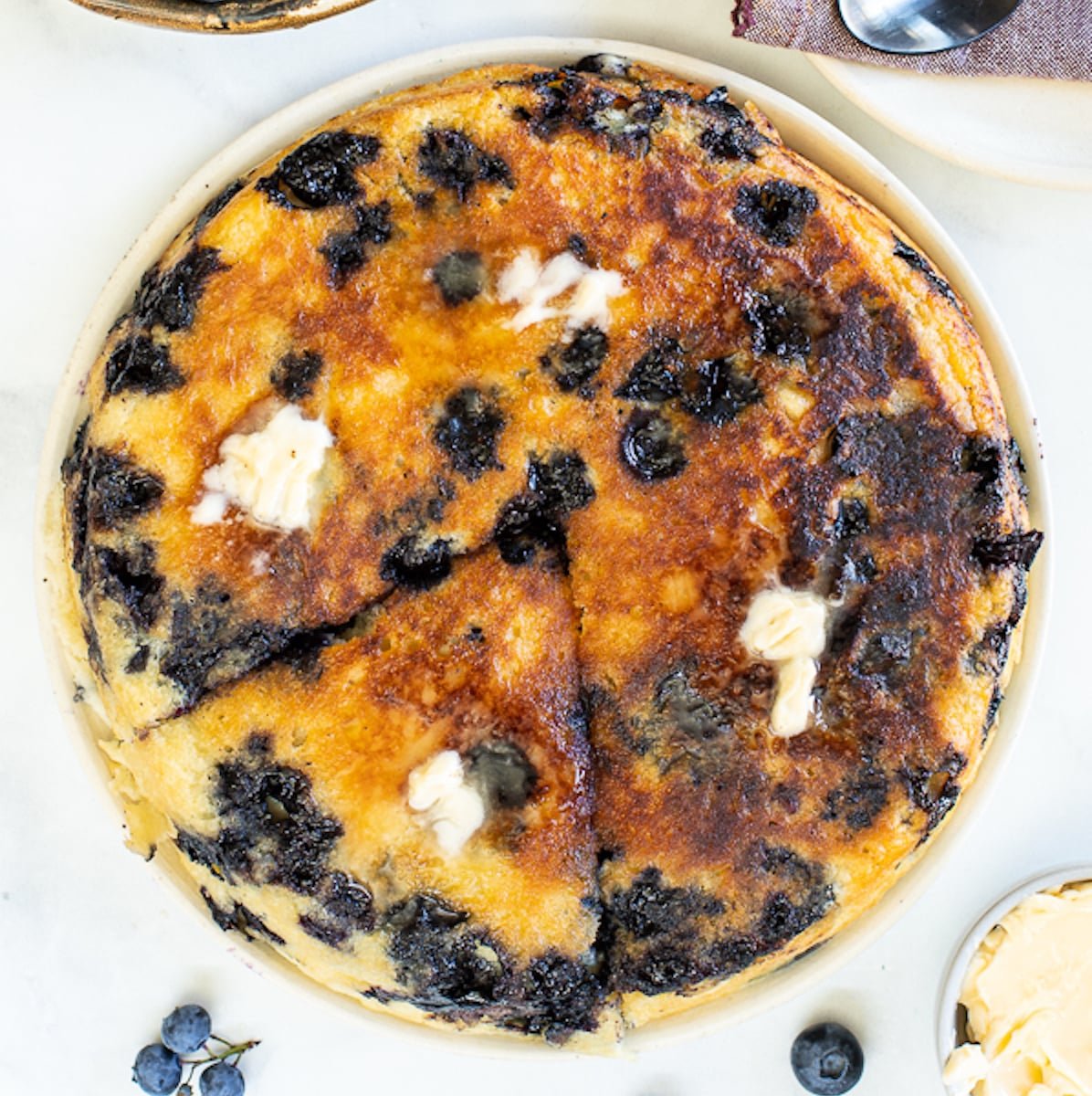 A super thick and fluffy, giant, no flip, giant Vegan Blueberry Pancake that is melt in your mouth golden and bursting with juicy blueberries. Perfect for feeding a family without having to stand over the stove for ages!
make this recipe 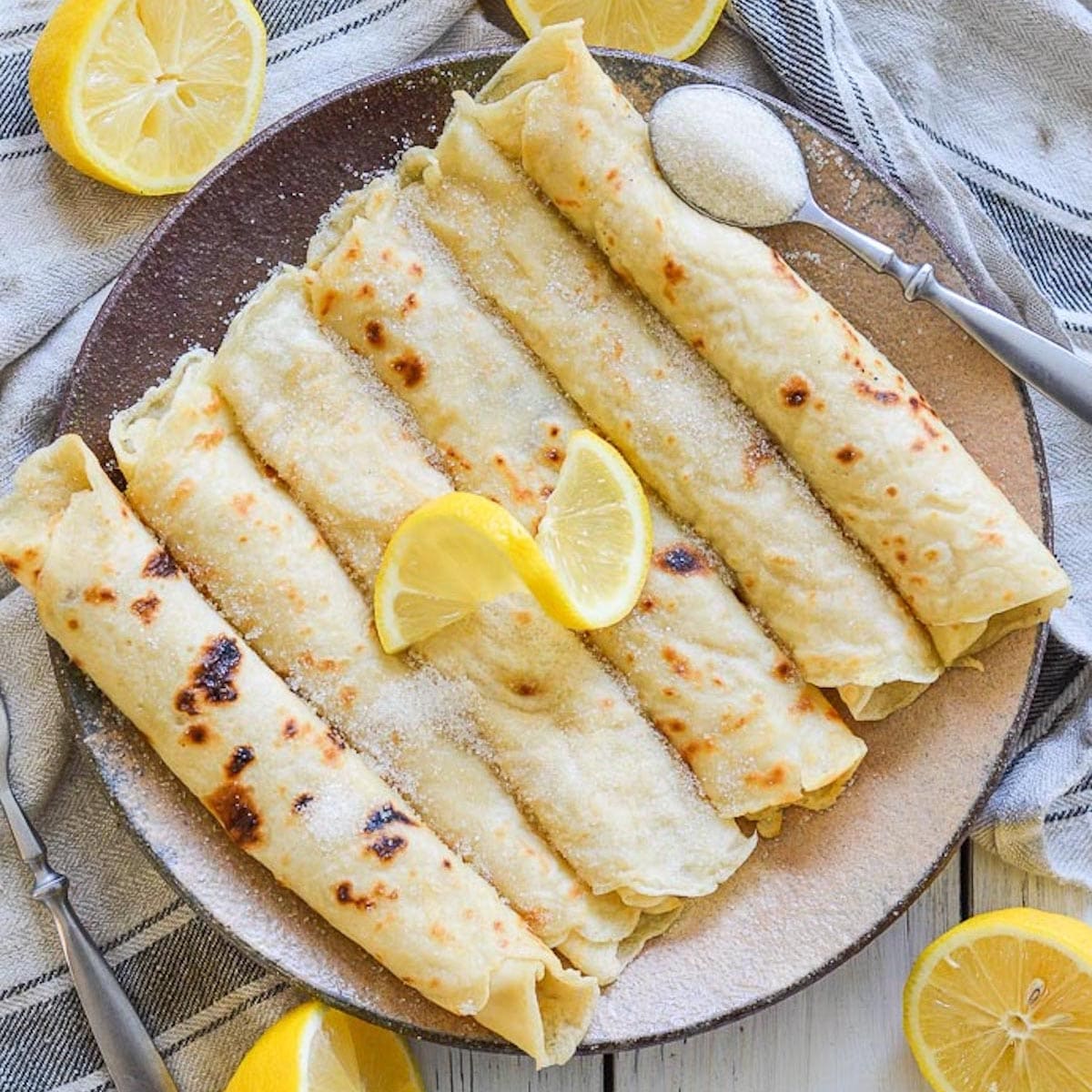 Foolproof Vegan English Pancakes. Quick & easy to make & great for dessert or brunch! They are beautifully freckled and so good straight from the pan, served glistening with fresh lemon juice & sugar.
make this recipe 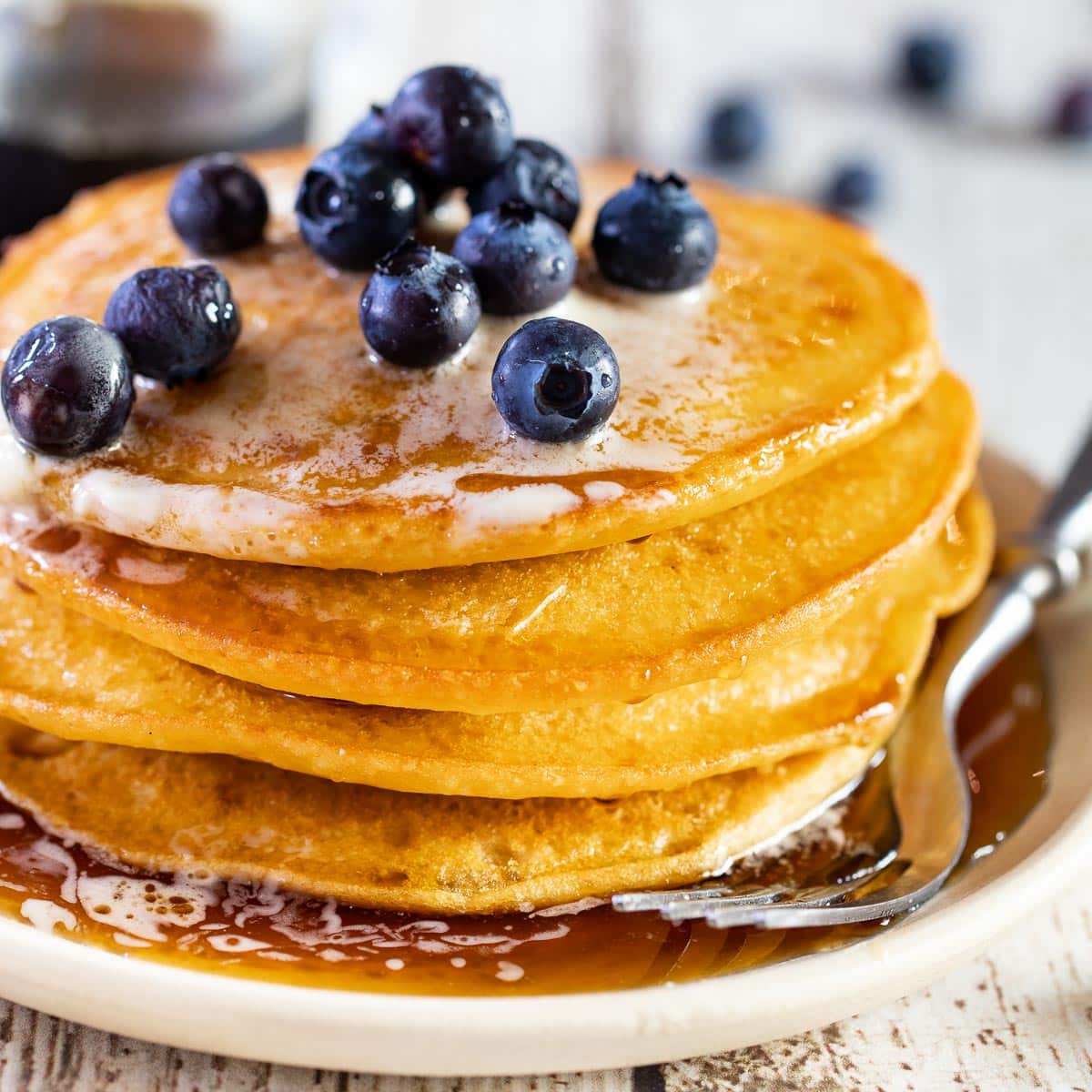 Super quick and easy 5 ingredient Corn Flour Pancakes. They are golden, fluffy, and can be mixed up & on your plate in under 15 minutes!
make this recipe

Healthy Oil-Free Vegan Pancakes For One 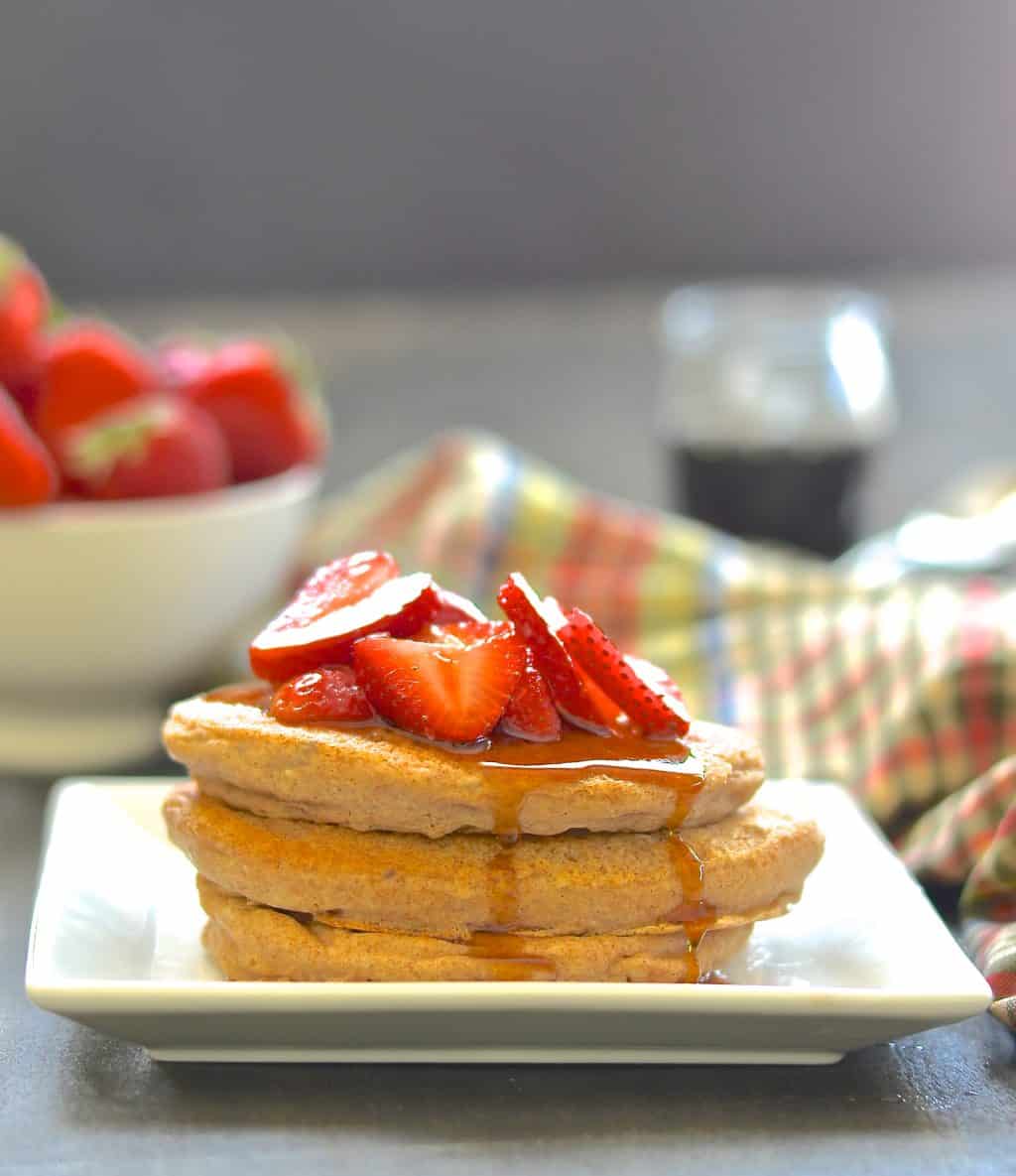