JUMP TO RECIPE PIN
5 from 20 votes 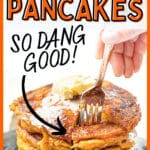 Vegan Pumpkin Pancakes are here in time for all of your fall brunching needs! This recipe is an adaptation of my very popular vegan banana pancakes and if you've tried that recipe then you know how absolutely amazing and ridiculously fluffy they are.

Well, this fall version is just as good! We're talking golden, hearty, cozy completely eggless pumpkin pancakes with just the right amount of pumpkin spice for the best flavor. And they are fluffy. Beyond your dreams fluffy and light. Enjoy them on rotation with my vegan pumpkin muffins for fall feasting perfection!

Here is what you will be needing to make vegan pumpkin pancakes:

And a few ingredient notes:

Some chocolate chips or orange zest added to the batter is really good if you fancy switching them up a bit!

Success Tip - With any recipe involving flour, I highly recommend that you weigh it. Cup measurements are not accurate enough to get the best and consistent results. If you do need to use cups, spoon the flour into the cup then level off the top with a knife without compacting it or shaking it down. DO NOT scoop the flour up into the cup as it will affect the outcome of the recipe. Digital scales are available at most big grocery stores for around $15. It's so worth it!

How To Make Vegan Pumpkin Pancakes

These eggless pumpkin pancakes are made in just a few easy steps. Here's how:

Success Tip - I love to cook these pancakes in a cast-iron skillet. It makes the outsides golden and deliciously crusty. A great contrast with the soft, fluffy insides!

Put leftover pancakes in an airtight container or bag then store in the fridge or freezer. They will keep in the fridge for 2 or 3 days or in the freezer for up to 3 months. From the fridge, reheat them in the microwave for 20-30 seconds, or pop them in a toaster or skillet until heated through.

Nothing else is needed here except a rather large pat of vegan butter and a hefty drizzle of maple syrup. That's always my pancake topping of choice and the best way to eat these IMO. You could also try:

What can I use instead of pumpkin?

Any squash puree will work in this recipe, as will sweet potato puree.

How do you make sure vegan pancakes cook through and become fluffy?

First, don't cook them over too high a heat. They should be cooked medium-low. They don't have egg to set them so need time to dry out and become fluffy. Also, make sure you weigh and measure the ingredients properly. The wrong ratios (even slight) will affect the texture of the pancakes.

What can I use instead of pumpkin spice?

Can I make pumpkin pancakes as waffles?

Yes. Add the batter over a medium heat, and keep cooking them until the steam stops coming out the sides. Even if your waffle maker tells you otherwise. That's the trick to perfect waffles! 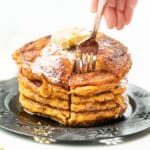 This recipe was originally published on October 17th, 2019. I've since rewritten the post and now I am republishing it for you. I hope you enjoy it. Thank you for following A Virtual Vegan!