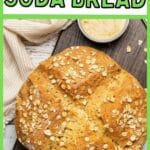 This rustic Vegan Soda Bread is such an easy vegan bread recipe. It’s a yeast, dairy, and egg-free bread that is really quick to make with no kneading or complicated shaping involved. Enjoy it fresh from the oven, slathered with vegan butter and dipped in some Vegan Irish Stew!

In this post - Everything you need to make perfect Vegan Soda Bread:

Carb lovers unite because here is my super tasty Vegan Soda Bread recipe. If you've been wondering how to make soda bread vegan I've got you. And this is a great recipe to master because it's made with budget and pantry-friendly ingredients and is super quick and easy with no yeast or kneading.

Just like my no yeast white-bread, you can have this Vegan Irish Soda Bread made and in the oven within 10 minutes. Simply mix the dough up in a bowl (no kneading required), shape roughly (the more rustic the better) and bake. It doesn’t get much easier than that!

We're talking a hearty, crusty, craggy crust and a dense but soft crumb which makes it perfect for serving up with hearty bowls of soup or vegan Irish stew. I'm not going to lie though... My favourite way to eat it is slathered in vegan butter and strawberry jam for breakfast!

What Is Soda Bread?

Soda bread is a quick bread that is baked in many different cultures, and although it's commonly attributed to Ireland, it was actually first created in America. It is called soda bread because baking soda (or bread soda or bicarbonate of soda as it's know in Ireland) is used to leaven it.

Soda bread became a staple in Ireland in the mid-1800s, largely as a result of the potato famine and was turned to as a filling and cheap alternative to potatoes. It was the perfect solution because most of the flour the Irish had access to at that time was more suited to quick bread than yeast bread, baking soda was relatively cheap, sour milk was easily available, and the bread was easy to cook in a cast-iron pot over an open fire.

The use of baking soda instead of yeast, and buttermilk (or a clever buttermilk substitute as is the case in my vegan take of a traditional Irish soda bread recipe) is what gives soda bread its unique appearance, texture and flavour.

Traditional Irish soda bread is made using buttermilk which is not vegan. However, my vegan version replaces the buttermilk with soy milk, vegan yogurt, and vegan butter. This combination emulates the action and flavour of thick, tangy, buttermilk perfectly and makes for a really delicious loaf. So if you're wondering if vegans can eat soda bread, then yes they can with a few modifications and to be very honest, you really can't tell the difference.

To make this recipe, you will need :

And some ingredient notes:

Expert Tip - if you have a cast-iron skillet I recommend you cook the bread on that as it makes the crust crustier, more golden, and more delicious. If you have the black Dutch oven I recommended in my Vegan Kitchenware Essentials post, the lid works perfectly for baking this bread on. A baking tray is fine if you don't have a cast iron skillet though.

How To Make Vegan Soda Bread

Here's how to make yeast-free soda bread in just a few steps:

To get the very best results take note of these tips:

Why Is There A Cross In Irish Soda Bread?

The cross in Irish Soda Bread is a form of scoring which creates a weakness in the surface so the bread can expand as it bakes. If you don't score it, you could get some bursting out in other places, such as the bottom and sides, ruining the appearance of your bread. It also allows the heat to penetrate into the deepest part of the loaf more easily, ensuring it cooks quickly and evenly.

Functional purpose aside though, legend has it that the cross was cut to allow the devil to escape while it baked. Also, being a Christian country, the cross is thought to symbolize the crucifix. By cutting the cross you are giving thanks. The cross also helps the "breaking of the bread" into 4 easy pieces once it's baked.

And a tip for scoring dough, I find it so much easier to wet the knife. That goes for scoring any bread, not just this soda bread. It helps stop the blade dragging the dough and gives a cleaner cut. I run the blade under the tap or dip it into a tall glass of water between each cut.

It's perfect as it is but feel free to make it your own! Additions I love to add sometimes are:

Vegan Irish soda bread keeps well for a few days and also freezes and reheats well. Here's how to do it:

Irish soda bread can be used in any way you would regular bread although its hearty texture makes it especially great for dipping in soups and stews like my Vegan Irish Stew.

You can also use it for sandwiches, toast it, spread it with butter and jam or peanut butter for breakfast, or eat with delicious vegan cheese, I also love using it for avocado toast and toasted as a base for my vegan scrambled eggs! 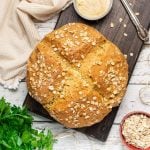 No yogurt? - Use more dairy-free milk instead. A total of 330 mls (1 cup and 6 tablespoons). For the best flavour and texture though I highly recommend using yogurt. Storage & freezing - Keeps well for up to 3 days. Store in an airtight container or bag. Freezes well for up to 3 months. Defrost overnight or for a good few hours on the counter. Once defrosted it can be reheated. Place on a baking tray and bake at 350°F for about 20 minutes.