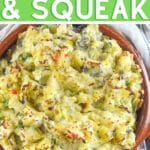 Bubble and Squeak is a simple, versatile recipe that is great for using up leftover cooked vegetables or make it from scratch with just 4 ingredients. It's really easy and super budget-friendly!

If you've been wondering what to do with leftover boiled cabbage, kale, Brussels sprouts, or any other cooked vegetables, then my very humble but delicious Bubble and Squeak is your friend.

We're talking soft, fluffy mashed potatoes mixed with mostly cooked green leafy vegetables (but any non-leafy ones can go in too), and then baked or fried until golden brown.

It's an incredibly versatile and budget friendly meal, and perfect for using up your leftovers after a roast dinner, or at Christmas or Thanksgiving.

But even though that's the real purpose of this recipe, it's still worth making from scratch from time to time. I do often because I love it so much. In fact whenever I make a meal with cabbage or Brussels sprouts I always cook more than we need so that I can make it the next day.

What is Bubble & Squeak?

Bubble & Squeak is a traditional English recipe thought to date back to the early 1800's and it was designed to use up leftovers, usually from a Sunday roast or Christmas dinner. It's a humble and hearty meal that can be served for breakfast, lunch or dinner.

If you're a regular around here you will know that I am English, and Bubble and Squeak is a meal that I grew up eating for dinner on most Mondays. It was always made with the leftovers from Sunday's roast dinner. Yep, a Sunday roast is a real English tradition that happens in most households every single week, even in summer.

Wondering why it's called Bubble and Squeak? It is because of the bubbling and squeaking noises the mixture makes in the pan when it's fried in hot oil.

These days I tend to cook my Bubble and Squeak in the oven rather than frying it, so there is no bubbling and squeaking, but we can't let that adorable name go. But in case you want to have the full-on traditional "fried" bubble and squeak experience, I'm including both oven-baking and frying instructions for you here.

Bubble and Squeak is English, but the Irish have similar dishes called Colcannon and Champ.

Champ involves warming milk with green onions, (or scallions as they are known in Ireland), so that the milk gets infused with the onion flavour. Then it's combined with mashed potatoes and served in a heap with melting butter pooling in the middle. It's incredibly good! Colcannon on the other hand, combines mashed potatoes with green onions and kale.

Interestingly the Scottish have a traditional dish called Rumbledethumps which is also very similar to Bubble and Squeak. Even more so than Colcannon.

To make my Bubble and Squeak recipe you need:

Tip - Savoy cabbage is one of my favourite greens for making Bubble and Squeak. That's because it gives good texture and a lot of flavour. It's the one with crinkled, ruffly, very dark green outer leaves that isn't as compact as other cabbages, like the one in the picture below. You can use any other cabbage though, except red that is, unless you want pink mashed potato!

How to make Bubble & Squeak

This Bubble and Squeak recipe is incredibly easy to make and there's no need to worry about looks because rustic is what we are going for. Here's how it's done:

Success tip - Don't over-boil the potatoes. Keep an eye on them and as soon as you can poke them with a knife or fork with minimal resistance, they are ready to drain and mash.

What to serve with Bubble & Squeak

Wondering what Bubble and Squeak goes with? Our favourite way to eat it is with a side of vegan sausages and vegan baked beans (homemade or from a can). And of course a very big squeeze of Original HP Sauce (another English favourite). For me it's a Bubble and Squeak must.

Here are some other ideas for what to serve with it:

Bubble and Squeak is such a versatile recipe and as long as you keep the proportions of mashed potatoes and other ingredients roughly the same (about 50/50 'ish) you can add whatever you like. It is best with the majority of vegetables being green and leafy though.

If you don't have Brussel's sprouts use all cabbage, if you have lots of Brussels sprouts that need using up, use them instead of the cabbage.

You can bake it, fry it or make patties with it and it is also amazing as a substitute for the regular mashed potatoes on my Lentil Shepherd's Pie.

What is the bubble in Bubble and Squeak?

The bubble in bubble and squeak relates to the noise the mixture makes in the pan. The moisture in the mashed potatoes and cooked vegetables makes them "bubble and squeak" when they come into contact with the hot oil that it was traditionally fried in.

What are the best potatoes to use for Bubble & Squeak?

Use potatoes that are good for mashing. Yukon Gold are the best in my opinion because they are the perfect mix of starchy and waxy. If you're in the UK, Desiree, Maris Piper and King Edward work well. I don't recommend Russet potatoes for mashing. They get too waterlogged and make for a soggy, bland mash.

How do you make Bubble and Squeak stick together?

The mashed Potatoes are the "glue" that holds Bubble and Squeak together so make sure they are mashed really well.

Is Bubble and Squeak healthy?

If you oven-bake rather than fry it, and limit or omit the optional oil and vegan butter, then Bubble and Squeak is a really healthy dish consisting of 100% vegetables.

Can you microwave Bubble and Squeak

What is the difference between Bubble and Squeak and Colcannon?

Colcannon is a mixture of mashed potatoes, green onions and usually kale, mashed together and served as it is without cooking it anymore.
Bubble and Squeak however was traditionally made with any form of leftover potato whether it be mashed, boiled, steamed or roasted, and green onions aren't something you would find in it. The green of choice is usually Savoy cabbage not kale, and once it's all mixed up together, unlike Colcannon, it then gets cooked again. In the old days it would have been fried in lard. Now oil or butter is used instead, or the Bubble and Squeak is oven-baked. 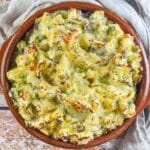 OR instead of raw cabbage and Brussels Sprouts use:

Make ahead of time - Make the recipe and spoon into the baking dish, then cover well and refrigerate for up to 3 days before baking. Storing leftovers - Transfer leftovers to an airtight container, or once cool, cover the dish you baked it in with cling-wrap. Store in the refrigerator for up to 3 days. Nutritional information is calculated WITH the optional oil and butter.

This recipe was originally published on September 22nd 2015. I've updated it with some new content and a video and am now republishing it for you. I hope you enjoy it. Thank you for following A Virtual Vegan!