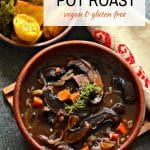 Recipe from The Plant-Based Journey by Lani Muelrath. Shared with permission from both Lani and Ben Bella Books. Image rights belong to Melanie McDonald of A Virtual Vegan.

How to make Portobello Pot Roast

A traditional Pot Roast is made by searing the meat, then placing it in a pot with the vegetables, broth, sometimes some wine and herbs. It's then all roasted together really slowly in the oven.

This Vegan Pot Roast is made in much the same way, by searing the portobello mushrooms then cooking them with the vegetables and broth in the oven.

Remember when you put it all together, that not much evaporation happens in the oven because it has a lid on it,  so don't add too much broth at first. Check it as it's cooking and add a little more if you think it needs it. You can always add more but you can't take it away.

I like to use the broth sparingly when I make this recipe so that the gravy is really thick, dark, rich and flavourful like in the photos, but you can add more broth (like in my video), so it is much thinner if you prefer. It's almost like a stew then.

This Portobello Pot Roast smells amazing and is so rich and delicious.

Serve it with some extra oil-free crispy roasted potatoes or my vegan mashed potatoes and some crusty bread to mop up that tasty gravy.

Also on the side, some steamed vegetables, roasted red cabbage, a little horseradish sauce and a big glass of red wine. The horseradish complements it perfectly.... as does the wine - hic ...

Got an Instant Pot?

If you have an Instant Pot, I have created a Vegan Portobello Instant Pot Pot Roast which you will love! Here it is:

This recipe has become a staple for us.  I do however add a little more red wine to the sauce and a bit less stock. A few dried and rehydrated porcini mushrooms to intensify the flavour a little are amazing too. Some other ideas: 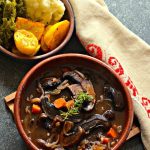 For more flavour, replace some of the broth with extra wine and throw in a handful of dried porcini mushrooms before it goes in the oven. If you would like to cook this Portobello Pot Roast in a slow cooker then prepare as directed until the gravy is made, then tip it into the slow cooker and add the rest of the vegetables and the seasonings. Sit well and  cook on low for around 4 hours or until the potatoes are tender. Add a little more liquid if it looks like it might dry out towards the end. You could use broth or some red wine.

This is a popular recipe that was previously published on A Virtual Vegan in 2015. I have updated the post and added a video to make it even better!