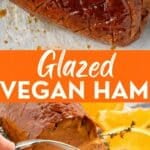 Amazing Vegan Ham complete with maple brown sugar glaze! This seitan ham is sticky, tender, juicy, smoky sweet, perfectly meaty, and absolutely delicious! Perfect for the holidays, slicing as deli meat, or for use in recipes that call for cooked ham or bacon. No steaming involved!

That family holiday tradition of roasting, glazing, then serving up a glistening ham? Start your own kinder tradition with this Vegan Ham recipe which plays on the classic combination of smoked ham and sticky brown sugar maple glaze.

It’s meaty and tender with lots of layers of flavour, and it's humble and old-fashioned in all the right ways. The perfect centerpiece for Thanksgiving, Easter, or Christmas and such a good vegetarian and vegan substitute for ham.

Turn some simple ingredients into an amazing vegan meat alternative! Here is exactly what you need to make Vegan Ham:

And some important ingredient notes:

How To Make Vegan Ham

A quick summary of how to make your own delicious Vegan Ham (for more detailed instructions see the recipe card):

Don't be stingy with the glaze. When I say "slather" I mean "slaaaaaatthhhher". The glaze will caramelize and seep down into the crevices adding loads of extra flavour. It also makes it look really good!

Success Tip - For the very best results, (as with all seitan), I recommend refrigerating the vegan ham overnight before slicing, then bringing it to room temperature before serving. You can bake, glaze then store, or bake the ham, store it in the fridge, then score and glaze a day or two after. This works well if you want to serve it warm at a later date.

Serve this delicious vegan ham roast as part of your vegan holiday meal alongside other seitan recipes like my vegan roast, vegan beef, and vegan sausages, slice as deli meat, and use in salads and sandwiches, or chunk it up and add to recipes that call for diced ham or bacon. There are so many things you can make with it.

I love serving it up as a meal with: 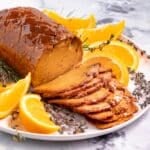 For best results refrigerate the ham overnight before slicing, then bring to room temperature before serving. You can bake, glaze then store, or if you prefer, bake the ham, store it in the fridge, then score and glaze a day or two after. This works well if you want to serve it warm at a later date. Storing Leftovers - Wrap well to keep moist then store in the fridge for up to 10 days. It can also be frozen for up to 3 months. I recommend freezing in blocks rather than slices.