JUMP TO RECIPE PIN
5 from 16 votes 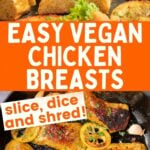 Enter - A fabulous, foolproof recipe for Vegan Chicken Breasts. Make up a batch to keep in your fridge or freezer and use in any way you would regular chicken: Pan fry, oven bake, grill, slice, dice or make shredded vegan chicken!

This seitan chicken is tender, meaty, perfectly seasoned, packed with flavour and incredibly versatile. In fact, just like my vegan roast, it is so incredibly delicious it’s going to blow your mind!

And if you're looking for a high protein vegan meal addition then this recipe is your friend with over 38 grams of protein per individual vegan chicken breast!

So what is vegan chicken made of? Here are the ingredients:

And some notes on a few of the most important:

Success tip - The most accurate way to measure vital wheat gluten is to weigh it. Cups are not an accurate measure. If you must use cups, fluff the VWG with a fork, then spoon it gently into the cup without shaking or compacting it down. Then scrape across the top lightly with a knife to remove the excess. Do not scoop the VWG up into the cup or you will end up with much more than is intended and affect the outcome of the recipe.

How to make Vegan Chicken Breasts

Wondering how to make seitan chicken? Well, here's how:

Success tip - Wrapping to contain the vegan chicken breasts while steaming is important for texture. Without it they expand way too much and become spongy.

Seitan chicken is best made ahead. It's texture and flavour gets better once it's been refrigerated. Once steamed, store in a sealed container in the fridge for up to a week or in the freezer for up to 3 months.

How to use vegan chicken

Vegan chicken breasts are cooked through after steaming, and can be used as they are in sandwiches and salads etc, but they do benefit from being cooked again for a short time to get some golden colour and caramelization.

When pan-frying or oven-baking them, add a little moisture while cooking to keep them moist. I like to baste them with some lemon juice, vegan butter, garlic butter or vegan browned butter, stock or sauce (like sweet chili, peanut or BBQ sauce).

This vegan substitute for chicken can be used as a whole "breast", or you can slice or dice it. You can even tear it or use a fork to make vegan shredded chicken. Then you can grill, pan fry, stir fry or oven-bake it, using it in all of the vegan chicken recipes of your dreams!

Success tip - If adding the chicken to something saucy/liquidy (like a curry or soup), add near the end of the cooking time for optimum meaty texture. Just give it enough time to heat through in the sauce/soup before serving.

My favourite ways to use seitan chicken breasts so far have been:

What if I don't have a food processor?

Use a blender to blend the beans, seasonings and liquids, then transfer to a bowl before adding the vital wheat gluten. Knead for 2 minutes, then cut and shape into individual chicken breasts and continue with the recipe as written.

Can I use tofu instead of chickpeas?

I don't recommend this. In tests the seitan didn't turn out nearly as good when tofu was used.

Can I steam them in an Instant Pot?

I don't recommend using an Instant Pot for this recipe. The chicken breasts do not turn out well. 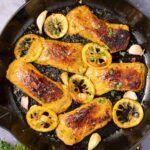 Store in a sealed container in the fridge for up to 1 week or the freezer for up to 3 months. Tip - When pan frying keep the breasts nice and moist with lemon juice or a bit of stock. When grilling, baste well to stop them from drying out. No Better Than Bouillon No Chicken Base? The garlic or mushroom Better Than Bouillon work well too. If you can't get hold of of those either, use the same amount of bouillon powder or 2 stock cubes in as chicken'y a flavour as you can find. Failing that, use a good quality, well-flavoured vegetable or mushroom stock instead of the water and skip the Better Than Bouillon.