JUMP TO RECIPE PIN
5 from 3 votes

Fragrant, rich & deliciously creamy Slow Cooker Rice Pudding with Turmeric & Cinnamon. It's like golden milk but in dessert form & it will soothe & warm you right through to the soul! (If you don't have a slow cooker you can make it on the stove top instead). 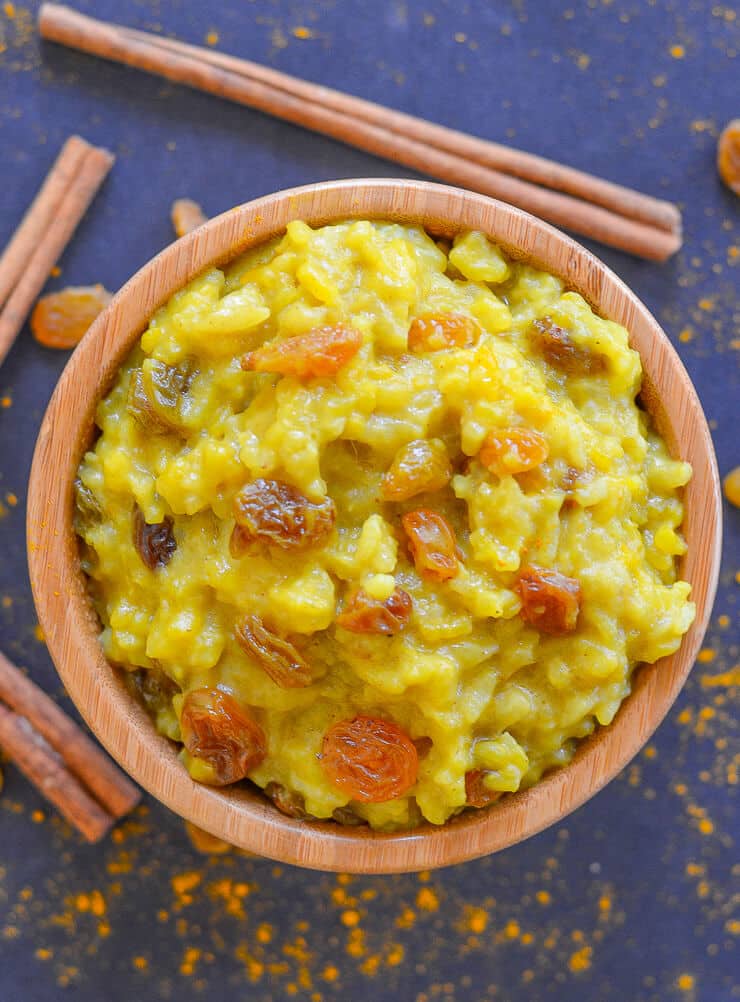 I'm not usually a milky drink kind of girl, but I do enjoy the odd mug of gently warmed, turmeric infused, homemade almond milk from time to time. It's such a soothing and comforting brew and it's sunny appearance is a real mood lifter.

This wonderful libation was my inspiration for this Slow Cooker Rice Pudding with Turmeric & Cinnamon. I've wanted to try making rice pudding in the slow cooker for a long while and although old fashioned plain rice pudding is wonderful, I always like to put a little twist on my recipes, hence it's transformation into a somewhat beautiful, Golden Rice Pudding.

I don't think you can get a much cozier dessert than rice pudding, except perhaps when you add warming, aromatic and golden turmeric, woody, spicy cinnamon and plump juicy golden raisins. They take you into soothing, comfort food overload.

In this recipe, short grain rice is simmered slowly with these fragrant ingredients until it is rich, golden and deliciously creamy. Served warm, it is such a comforting, soothing dessert and one that you will want to make time and time again. 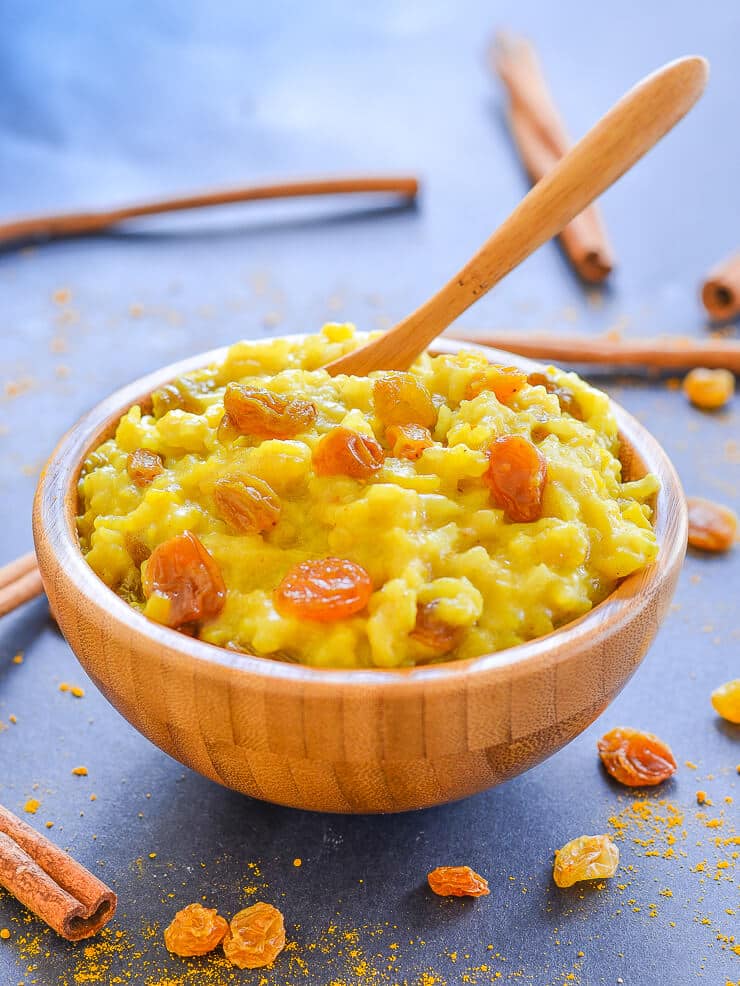 For the very best, creamy, soft texture, short grain rice is essential when making rice pudding. When choosing, check the appearance of the grains. They should be small, plump and almost round. When I lived in England, pudding rice was a variety widely available and that is perfect for this recipe. Here in Canada I have had some problems finding pudding rice. I did find some labelled as 'Sweet Rice' once and it looked the same as pudding rice with really short round grains.  Unfortunately I haven't seen it again since. Because of this I tend to either buy this one from Amazon, or I buy risotto rice such as Arborio, Carnaroli or Vialone Nano. You should be able to find one of those in almost all grocery stores. Any of them will make a great rice pudding.

HOW TO MAKE SLOW COOKER RICE PUDDING WITH TURMERIC & CINNAMON

This Rice Pudding couldn't be easier to make. Simply put all of the ingredients (except the golden raisins) into a slow cooker, turn to low and simmer away for three hours. Give it a little stir and add the golden raisins about ten minutes before you want to tuck in. They don't need long to soften and plump up beautifully. 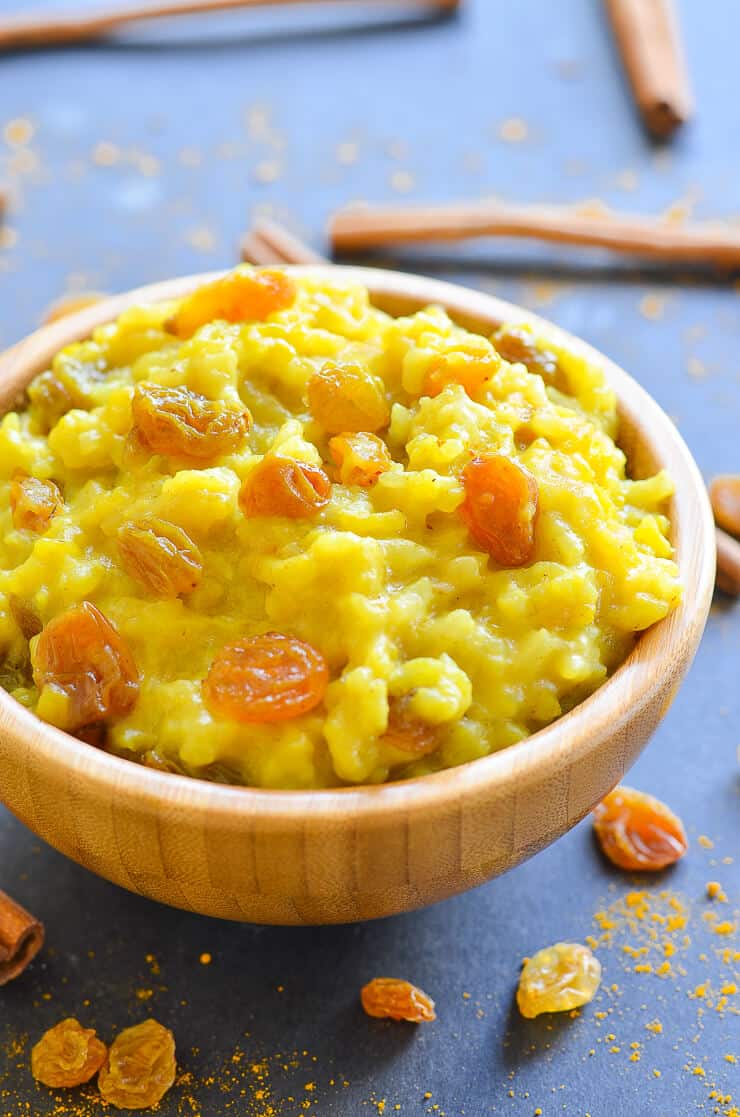 AND IF YOU DON'T HAVE A SLOW COOKER?

Put all of the ingredients (except the golden raisins), into a pan and simmer gently on the stove, stirring occasionally until the rice is soft and the pudding is creamy. The raisins need to be added in the last ten minutes of cooking time.

I can't wait for you try this Slow Cooker Rice Pudding with Turmeric & Cinnamon! When you do, be a ☆ and leave a comment below or share a picture on Instagram. I am @avirtualvegan. Add the hashtag #avirtualvegan to be sure I don't miss them. 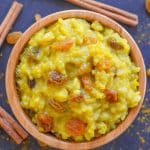 Author: Melanie McDonald
5 from 3 votes
Fragrant, rich & deliciously creamy Slow Cooker Rice Pudding with Turmeric & Cinnamon. It's like golden milk but in dessert form & it will soothe & warm you right through to the soul! (If you don't have a slow cooker you can make it on the stove top instead).
Print Recipe Pin Recipe SaveSaved!
PREP TIME: 5 minutes
COOK TIME: 3 hours
TOTAL TIME: 3 hours 5 minutes
Servings: 6 servings

The rice you use must be pudding rice or short grain rice. Look for grains that are plump and roundish. Any labelled as pudding rice will be fine, as will those labelled as risotto rice such as Arborio, Carnaroli or Vialone Nano. This rice pudding will keep for 3 - 4 days in the fridge and can be warmed up gently again on the stove or in a microwave before serving.