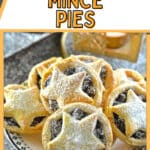 These homemade Vegan Mince Pies hold the very essence of Christmas in their delicious pastry crusts. Nothing can beat one warm from the oven!

To bake them you will need a shallow mince pie tray or muffin pans. If you use muffin pans your mince pies will be deeper and you won't get so many out of this recipe so feel free to double it if need be.

How to make vegan mince pies

Making my Vegan Mince Pies is a breeze. The pastry crust uses my staple vegan pie crust recipe which comes together in a food processor in minutes.

Here's how it's done:

While they bake, your house will fill with the warmly spiced, festive scent of Christmas!

Vegan Mince Pies are great served warm straight from the oven. Eat them as they are or top with a generous dollop of melting vegan brandy butter, vanilla ice cream, vegan custard or vegan whipped cream.

How to store, freeze and reheat

Baked Vegan Mince Pies will keep in an air-tight container for up to a week. They can easily be reheated in the oven to bring them back to their fresh from the oven status. Just place them on a baking tray and bake for about 10 minutes at 350 °F.

Mince Pies can also be frozen before or after baking. Make them up to the point of baking, then stop and freeze them in their trays. When you decide it's mince pie time, pull them out of the freezer and bake straight from frozen. They will take about 5 minutes longer than the time stated. If they were already baked when you froze them place in the oven at 350 °F for about 15 minutes to reheat. 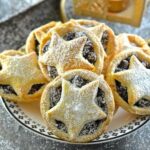 If you don't have a shallow bun pan or a mince pie pan then you can use a standard muffin pan, or buy individual tin foil cases. If you don't have any powdered sugar or prefer not to use it then you can sprinkle the top of the mince pies with some granulated sugar BEFORE baking them. It makes them look pretty and adds little texture too. When calculating the nutritional information I could only find mincemeat which had suet as an ingredient. If you use my mincemeat recipe it contains no suet so the calories and fat content will be a bit less.