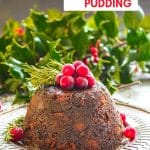 The Ultimate Vegan Christmas Pudding. It's dark, rich, fruity, moist & boozy & so much lighter than the dense, heavy puddings you might have tried in the past!

Today, I have a proper British pud for you, just in time for Christmas!

If you want more than dessert though, go check out my Vegan Christmas Dinner Menu, Shopping List and Timeline. I have planned the whole meal for you, down to the tiniest detail!

If it's just dessert you're after though, then this Vegan Christmas pudding is for you!

Christmas Pudding is such a popular dessert at Christmas. I think that most families have one and I certainly grew up with it being served every year. The funny thing is,  I absolutely hated it. In fact, I think most children do. I guess it's a dessert that's suited to more mature palates.

Now though, I can't get enough. It's so good!

I wonder if part of the reason I didn't like it was because it was always so heavy and dense. I also have a terrible memory of a time when it was served up with ice cream and all of the animal fat in the pudding turned white and solidified. It was the most awful, congealed thing ever.

At the time I wasn't vegan, and had no interest in reading labels and so had no idea that Christmas Puddings were made with suet.

For those of you who don't know what suet is, it's a type of animal fat that comes from around the kidneys of sheep and cows. That's why it hardened and went white when it came into contact with my ice-cream. Pretty disgusting, eh?

How to replace suet in a Christmas Pudding

These days, a lot of Christmas Pudding are actually made with vegetarian suet but despite that, they still use eggs so aren't typically vegan.

You might be wondering why I didn't use vegetarian suet in this recipe?

Suet is traditionally used in Christmas Pudding because it has a high melting point and the pudding has a chance to set before the suet melts properly. Apparently, if you were to use a fat source with a lower melting point like butter, the pudding will become heavier and greasier.

After testing many variations of my Suet-free Christmas Pudding recipe, I settled on using coconut oil to replace the suet, which is ironic as it has a really low melting point.  It does a fantastic job in this recipe though.

I tried many alternatives including my Vegan Butter, a light olive oil, and oil-free versions with coconut butter or nut butter, but coconut oil came out tops every time.

I try to make a lot of my recipes oil-free whenever I can, but there was no getting away from the fact that this recipe needs a bit of oil to be good. And it is Christmas after-all!

The coconut oil gives the pudding a beautiful moistness and despite what the suet supporters would have you believe, it isn't greasy in the slightest. It even stands the cold ice-cream test!

As well as being perfectly moist, this Vegan Christmas Pudding is rich, dark, absolutely packed with flavour and for a pudding that is literally stuffed with dried fruit, it is surprisingly light. Not at all like the heavy, dense puddings of my childhood.

It is better than any non-vegan Christmas Pudding I have eaten (and I've eaten quite a few).

Why is Christmas Pudding also known as Plum pudding?

Christmas Pudding dates back to the 15th century where it was made with a combination of meat, root vegetables and dried fruit and known as "plum potage". The term "plum" was (and still is when describing this pudding), a generic term to describe any dried fruits.

Confusingly a Christmas or Plum Pudding doesn't have to contain plums. Most commonly used then and now are raisins, currants and prunes along with any other dried, preserved or candied fruit that came to hand.

As dried fruit became easier to acquire, the pudding gradually transitioned to become a sweet one. Suet (animal fat) however, was and still is commonly used, until I got my hands on it that is!

How to make Vegan Christmas Pudding

A lot of people feel a little daunted at the thought of making their own Christmas Pudding but it really isn't difficult at all and the hands on time is pretty minimal. See my step by step video just above the recipe!

Step 1 - You start by steeping the dried fruit in plenty of booze! You only need to leave it for as long as it takes the fruit to soak it all up. It doesn't take long and looks so glisteningly pretty!

Step 2 - Then it's just a case of stirring in all of the other ingredients and pouring the batter into a pudding basin that holds about 0.75 - 1 litre (1 quart). If it's a little bigger it won't hurt too much, it just won't completely fill the basin. I use an earthenware Mason Cash pudding basin like the one in the picture below. You can pick up one like it from Amazon or any good kitchen supply store. It's the same one I have and will probably last forever (unless I drop it!) but you can also buy plastic ones with lids if you want a cheaper option but please note that not all plastic pudding basins are pressure cooker/Instant Pot safe so be sure to check before using.

Either follow my directions for cooking in an Instant Pot (or any other electric pressure cooker) or use a steamer or you can simply steam/boil the pudding in a pan of water.

If you go the old fashioned route, the pudding will take 3 hours to cook, but this is all hands off time, except for checking that the water isn't drying up occasionally. If you have an Instant Pot though it will take about half that time (that includes the natural pressure release and coming to pressure etc).

I give full directions for how to cook a Christmas Pudding in an Instant Pot in my instructions below.

Step 3 - Once the Vegan Christmas Pudding is cooked, remove the wrapping and allow to cool, then wrap again in fresh parchment paper and foil to store.

Traditionally a Christmas Pudding is flamed immediately prior to serving. The hot pudding is doused in steaming hot alcohol and the vapours from the alcohol are set alight so that the whole pudding goes up in flames. If you decide to set yours alight, please do so carefully!

Do I need to make Christmas Pudding in advance?

This Vegan Christmas Pudding is excellent eaten right away. There is no need to make it weeks or months in advance.

However, it will get even better with age and you can make it up to 6 months in advance, as long as you include the alcohol. The alcohol is what preserves it.

How to make in advance

To make in advance, once it's cooked, open up the packaging to allow any condensation to evaporate, then replace the baking parchment circle with a fresh one, and re-wrap in new parchment paper and foil. I then wrap mine in some clean dish towels too, then store it like that in a cool, dark place like a closet or an unheated basement. To make it EVEN better, whilst in storage, open it up, peel back the parchment paper circle, and feed it a tablespoon of alcohol every week, wrapping it up carefully again after.  It will guzzle it up like a thirsty beasty and become even moister and boozier!

This Vegan Christmas Pudding freezes well and will keep, if wrapped properly, for up to one year. Just thaw overnight then follow the recipe where you left off, on Christmas Day.

How to serve Christmas Pudding

If you aren't familiar with traditional British Christmas Puddings, you might be wondering what you serve with them.

You can serve my Vegan Christmas Pudding with:

My favourites are either brandy butter or vanilla ice cream!

I know steamed puddings aren't too popular here in North America, but I really hope you will make an exception and give this Vegan Christmas Pudding a try this Christmas!

Success Tip - As with all of my baking recipes where precision is key to excellent results, I highly recommend using a kitchen scale to measure your ingredients, rather than using cup measurements. I love this one because it is very reasonably priced and it has a tare function which is really handy. It means you can place any bowl on the scale and reset to zero so it doesn’t include the weight in it’s calculation, plus you can reset to zero when adding multiple ingredients to the same bowl which saves on washing up! 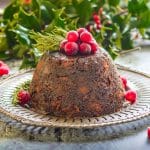 YOU WILL ALSO NEED:

IF USING AN INSTANT POT: (you will need to use a 6 quart IP or larger for this recipe)

IF USING A STEAMER:

IF USING A LARGE SAUCEPAN:

TO REHEAT THE PUDDING:

MAKING THE PUDDING ALCOHOL -FREE If you would prefer to make this pudding alcohol free you can replace the alcohol with apple juice or orange juice. Bear in mind though that the alcohol acts to preserve the pudding, so if you omit it, the pudding won't store well, unless you freeze it. You will need to keep it in the fridge and eat it within a week of making it. LEFTOVERS Leftover cut pudding will keep in the fridge for up to a week and can be reheated as mentioned in the directions. STORING This Vegan Christmas Pudding is excellent eaten right away. There is no need to make it weeks or months in advance. However, it will get even better with age and you can make it up to 6 months in advance, as long as you make it with alcohol in it. The alcohol is what preserves it. If you want to store a non-alcoholic pudding, please see my freezing instructions.  To store the pudding, once it's cooked, open up the packaging to allow any condensation to evaporate, then replace the baking parchment circle on the top of the pudding with a fresh one, and re-wrap in new parchment paper and foil. Then wrap in a couple of clean dish towels too, and store it like that in a cool, dark place like the basement or a cool, dark cupboard, or a wardrobe/closet in an unheated room.
I have actually kept one stashed away for over a year and it was still incredibly good when we reheated it.
If you want to make it even boozier and moister, while storing, open the wrapping carefully, peel off the parchment circle and feed it one tablespoon of brandy 4 or 5 times over the period of storing. Just spoon it on, let it absorb, put the parchment circle back, then wrap really well again and return to the cool, dark place. When you are ready to enjoy it, follow my reheating instructions in the recipe above.  FREEZING Leftover or whole puddings, whether alcohol is used or not, if wrapped well, will keep in the freezer for up to 1 year. Just defrost overnight and reheat as per my instructions above.