Published: May 2, 2017 · Modified: Oct 24, 2019 by Melanie McDonald · This post contains affiliate links · As an Amazon Associate I earn from qualifying purchases. · 26 Comments

JUMP TO RECIPE PIN
5 from 6 votes 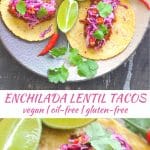 These Enchilada Lentil Tacos have an incredible depth of flavour! The lentils are cooked in a spicy enchilada sauce on the stove or in the slow cooker, then tucked inside tacos & topped with zesty lime slaw. The saucy lentils are also great for enchiladas, burritos, quesadillas or just served on rice.

THIS RECIPE IS SPONSORED BY CASABELLA

How have I been doing this for over two years and not created a taco recipe? I have absolutely no idea, but I am remedying the situation now with these absolutely delicious Enchilada Lentil Tacos with Lime Slaw just in time for Cinco de Mayo!

Lentils are such an underrated but wonderful ingredient. I love them in my Shepherd's Pie and they also work really well with spicy flavours like in my Keema Lentils and now in these flavour packed Enchilada Lentil Tacos.

We have all kinds of things going on in this recipe. Protein packed green lentils are simmered slowly in a rich and flavourful enchilada sauce then topped with a tangy lime slaw. The slaw adds texture and a zip of citrus flavour, not to mention some pretty in pink decoration. The flavour combination is like a party in your mouth.

Barely any effort is needed to make these tacos. All the sauce ingredients get blended up in a blender then mixed with the lentils and cooked slowly either on the stove or in a slow cooker. I expect they would work really well in a pressure cooker like an Instant Pot too.

The slaw contains only 3 ingredients and can be prepared in a couple of minutes if you have a food processor to do the chopping, or buy a pre-chopped bag from the grocery store for even less effort and just make the dressing which is quite literally just fresh lime juice and a touch of maple syrup. It adds the perfect amount of sharp sweetness to the spicy lentil filling.

As for accompaniments, the tacos are pretty filling themselves so don't really need much but a nice crisp salad would be nice and I would highly recommend a side of guacamole. Avocado and Mexican food go hand in hand, and the cool creaminess of guacamole works so well with with these tacos.

I have been using this nifty 4 in 1 Avocado Tool from Casabella when preparing my avocados. I get through such a lot of avocados, that having a dedicated tool has proven pretty useful. It sure beats my usual spoon and fork method!

This 4 in 1 Avocado Tool cuts, scoops, slices and mashes your avocado with ease. The cutting edge is not sharp at all so there is no danger of accidental cutting of hands but it slices though avocado incredibly easily. I have always used a spoon to scoop my avocado from its skin but this tool removes it so much more efficiently with nothing left behind at all. Once scooped out, it can be sliced or mashed with the tool. This tool would be great for mashing other things like banana and small amounts of potato too, or even for baby food preparation.

And this my friends is a Guac-Lock. A total game changer for me as it stops your guacamole from turning brown. I was sceptical but tested it this weekend. I made guacamole, put it in my Guac-Lock and left it out at room temperature for 24 hours just to give it a bit of an extra challenge. You might have seen my little Instagram story.

Twenty-four hours later I checked in on it and it was still exactly the same colour as was when I made it! If you are a guac lover you will know that usually it goes brown within a very short period of time. I have previously tried all kinds of tricks with no great success. The last one I heard was that if you covered it in water in a sealed container it would stay green. Well it stayed green but was a disaster when it came to pouring the water off. Half of my precious guacamole went down the drain with it. What was left was watery and disgusting. I had all but given up and come to the conclusion that I needed to just eat the whole batch or it was wasted. Now I have a Guac-Lock my brown guac problems are no more.

A scattering of fresh cilantro finishes off these Enchilada Lentil Tacos beautifully. It adds another fresh burst of contrasting flavour, and the pop of green against the dark lentils and the pink slaw is just beautiful.

I love herbs of all kinds and am so excited that my little herb garden is finally coming back to life after the long miserable winter we have had. I can't wait to be able to go cut my own as I need them instead of having to buy them. No more will I have to search for the scissors that someone has inevitably taken and lost just before I need them, because I now have my own Clip 'n Strip Shears! Not only do they snip through the toughest stems with ease, but they also have a handy leaf stripper built into the handle.

Woah... I've had such fun playing with my new fancy tools and creating this Enchilada Lentil Tacos recipes. I can barely contain my excitement about doing it all again this Friday!

I will be building tacos a-plenty, sprinkling them with cilantro, serving them with huge dollops of guacamole, then sitting back and enjoying the flavour p-a-r-t-y in my mouth.

I'm not much of a cocktail maker but when I do make one it needs to be 'da bomb.  This Mint Cucumber & Smoky Jalapeño Margarita from the lovely Kristy at She Eats fits the bill perfectly.

Roll on Cinco de Mayo. We all need some taco time in our lives!

If you give this recipe a try be a ☆ and let me know what you think in the comments below. I would love to see your Cinco de Mayo party pics but please make sure it's before you've had one too many tequilas! ???? 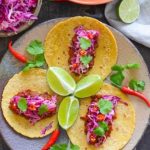 In a slow cooker

On the stove top

The filling and slaw are both totally oil-free but most store bought taco shells or tortillas do have oil in them. For a healthier, completely oil-free version, try using crispy lettuce leaves instead.  Nutritional information is calculated using Old El Paso 6" soft tortillas.

Thank you to our friends at Casabella for sponsoring this post!