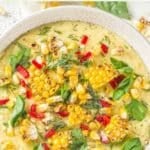 Quick and easy Vegan Corn Chowder. It's creamy, comforting, has only a handful of ingredients and can be ready in under 30 minutes!

When fresh corn is in season, Vegan Corn Chowder is a MUST and this one is quick and easy to make with just a handful of ingredients.

It's simple, creamy, comforting, naturally gluten-free, and just like my Tomato Basil Soup, just perfect for when you're craving a cozy dinner but still want something summery. We all know there's nothing quite like fresh corn or tomatoes to make a meal shine!

The ingredient list is pretty simple. Here's what you will be needing:

How To Make Vegan Corn Chowder

This is a really easy vegan corn chowder recipe that can be ready in less than half and hour. Here's a quick summary of how it's done:

Success tip - Tossing the corn cobs into the soup while it simmers adds lots of extra corn flavour so don't skip this step!

This delicious chowder is great as it is but feel free to switch things up to make it your own. Here are some ideas:

Vegan Corn Chowder is creamy, thick and comforting. It's chunky and filling enough to eat on its own but is also wonderful with some corn bread, sweet potato biscuits, healthy oil-free biscuits, or crusty bread:

Fill your bowl then top with your favourite toppings:

To grill corn as a topping - Completely remove the husks and silks from the ears, and place them straight on a hot grill for about 10 minutes, turning occasionally until nice char marks appear. This is good for visual appeal and smoky, sweet-char taste! Let them cool enough to handle then cut the corn off in chunky pieces with a sharp knife.

Can you make corn chowder with frozen corn?

You can! It will have a much better flavour when made with fresh corn but is still good with frozen. The amount to use is given in the recipe below.

Can you make corn chowder with canned corn?

I don't recommend using canned corn. The corn is what provides most of the flavour in this soup and canned corn isn't flavourful enough.

What are the best potatoes to use?

I like to use Yukon Gold potatoes in soups and stews. Red potatoes or russets will work well too.

How do I make my corn chowder thicker?

This chowder is thickened by the starchy potatoes and corn which are partially blended. To make it thicker just blend a little more until it's the right thick and chunky consistency for you. 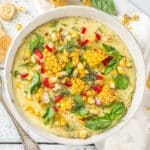 I love to garnish with some grilled corn, chopped red bell pepper and fresh herbs. Lots of other ideas are given in my post above! Storing Leftovers -  Transfer leftovers to an airtight container and refrigerate for up to 5 days. Reheat in a pan on the stove or in a microwave until piping hot. I don't recommend freezing this recipe.