Published: Feb 8, 2021 · Modified: May 30, 2022 by Melanie McDonald · This post contains affiliate links · As an Amazon Associate I earn from qualifying purchases. · 26 Comments 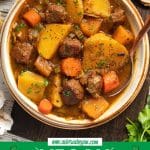 This one-pot, hearty Vegan Irish Stew is so flavourful and can be made on the stove, in an Instant Pot, or in a slow cooker. Vegan-friendly Guinness gives an incredibly rich, deep flavour to the gravy that is loaded with chunky, sweet, tender vegetables. Make it with just the veg, or add some optional vegan "meat" or mushrooms to make it even more satisfying and flavourful!

This recipe for Vegan Irish Stew is comfort food at its finest. Loaded with root veggies, optional seared vegan "meat" or mushrooms, and a thick, super-rich and flavourful gravy made from Guinness beer, this vegan stew recipe is amazing.

All of the flavours and ingredients in this recipe work so well together and just like my Vegan Cabbage Soup, it is just perfect for serving up as part of your St Patrick's Day celebrations or for a tasty weeknight dinner.

What is Irish Stew?

Traditional Irish stew (Stobhach Gaelach in Irish Gaelic) is a very simple recipe made with lamb or mutton, onions, potatoes, carrots, herbs and seasonings. They are cooked long and slow in a thin, completely unthickened broth which gets all of its flavour from the meat and vegetables.

Irish stew is not vegan but it's easy to make a great-tasting and hearty vegan stew with an Irish theme. I should note though, that it's really hard to make a "traditional" Irish stew vegan because it is just lamb, potatoes, vegetables, stock and seasoning. If we just used those ingredients replacing the lamb for vegan "meat" it would be really tasteless because vegan "meat" doesn't have the same flavour. So my vegan version needs some extra "flavour" helpers, but I have tried to keep an Irish theme going as you'll notice with the addition of Guinness beer and the vegetables used.

The ingredients in this vegan Irish recipe are simple and other than the beer and optional vegan "meat" (or mushrooms) are all pretty pantry friendly.

Here's what you will be needing:

And some notes about a few of the ingredients:

Success Tip - Use starchy potatoes like Yukon Gold or Russet so they can become meltingly soft in the gravy.

How to Make Vegan Irish Stew

The great thing about a vegan stew that doesn't use lamb/mutton is that it doesn't need to be slow-cooked for hours and hours to be good. This Vegan Irish Stew can be ready and on the table in a little over one hour but if you get caught up and need to delay it, it will happily simmer away gently for hours.

Success Tip - Don't leave the beefless tips, mushrooms, or seitan in the stew for the entire cooking time as they will get too soft and lose their texture. By searing them then setting aside and adding them back in at the end, you get all the flavour without losing texture.

For Instant Pot and slow cooker instructions see the FAQs.

This hearty one-pot dish is a meal in itself and doesn't need much to accompany it except some vegan soda bread slathered with vegan butter to mop up that tasty gravy.

If you don't have soda bread any crusty bread will be great, and although not in keeping with the Irish theme, my no-knead focaccia would be amazing with it, as would my sweet potato biscuits.

Leftover vegetarian Irish stew can be kept in an airtight container in the fridge for up to 5 days. It also freezes well for up to 3 months, just be aware that potatoes can become a little floury once they have been frozen, defrosted and reheated.

Defrost overnight in the fridge then reheat in a pot on the stove until piping hot, or for a few minutes in the microwave. Feel free to add a splash or two of broth or beer to help thin it out if necessary.

Guinness in draught, bottle and canned form has been vegan-friendly since 2018. Read more about it on their website here.

What can I use instead of Guinness?

If you don't have Guinness or other dark stout, brown ale or red wine will work well flavour-wise instead. If you don't cook with alcohol at all, replace the beer with more stock, but make sure that it's a really good, flavourful one.

How can I make this gluten-free?

How can I tell if the beer I choose is vegan?

Guinness is vegan. If you use another brand, most manufacturers are happy to let you know if you shoot them a quick email. Or you can go to Barnivore's website or app and type in the brand name and it will tell you.

What potatoes are best to use?

I love to use Yukon Gold in soups and stews. They become very soft yet still hold their shape, they don't get floury, and they are naturally sweet when slow-cooked.

How can I make this in a slow cooker?

Sear the beefless tips/mushrooms in a pan then remove until the end. Saute the onions, carrots and celery in the same pan as per my instructions, and add the garlic for the last 30 seconds. Then transfer them to the slow cooker.
Stir in the flour then add everything else (adding the liquid gradually to work out lumps) and stir really well. Cover and cook on low heat for 6 to 7 hours or high heat for about 3-4 hours or until the potatoes are very tender. Remove the herb stalks and add the beeefless tips/mushrooms back in. Let them heat through for 10 minutes then serve.

How can I make this in an Instant Pot?

Saute the vegan beef, set aside then saute the onions, celery, carrots and garlic. DO NOT add the flour. Turn the Instant Pot off and add everything else except the flour. Give the bottom of the pot a good scrape with a metal spoon to get any burnt-on residue off, close the lid, seal the vent, and cook on manual/pressure cook, high power for 15 mins. NPR for 10 minutes then release what's left. Make a slurry with the flour and water, scoop out the fresh herb stalks and discard. Turn the Instant Pot to "sauté" and pour in the slurry, stirring constantly, then add the vegan beef. Give it a couple of minutes for the gravy to thicken then serve. 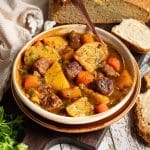 Author: Melanie McDonald
4.94 from 59 votes
This one-pot, hearty Vegan Irish Stew is so flavourful and can be made on the stove, in an Instant Pot, or in a slow cooker. Vegan-friendly Guinness gives an incredibly rich, deep flavour to the gravy and it's loaded with chunky, sweet, tender vegetables. Make it with just veg, or add some optional vegan "meat" or mushrooms to make it even more satisfying and flavourful!
Print Recipe Pin Recipe SaveSaved!
PREP TIME: 10 minutes
COOK TIME: 1 hour
TOTAL TIME: 1 hour 10 minutes
Servings: 8 servings

For Instant Pot and Slow Cooker instruction see the FAQs in the post above.  To make gluten-free - Use your favourite gluten-free and vegan beer of choice, cornstarch instead of the flour, gluten-free soy sauce or Tamari and mushrooms instead of beefless tips/seitan.