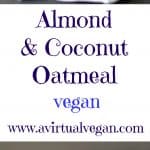 Upgrade your regular bowl of oatmeal to this ultra-creamy & rich bowl of Almond Coconut Oatmeal gorgeousness and I promise you won’t be disappointed!

I created this Almond Coconut Oatmeal recipe some time ago but as I knew I would soon be reviewing a book all about oatmeal and featuring one of it's recipes, I thought I would hold off posting it for a while. I have eaten it for breakfast a lot since then and love it so much that I am excited to share it with you today.

This oatmeal is quick and easy to make and has a secret ingredient which makes it deliciously rich, creamy and almost buttery tasting.

I knew I wanted to make almond & coconut flavoured oatmeal but I wasn't keen on using almond extract as it has such a strong and sometimes artificial tasting flavour. It is useful in some recipes but it wasn't what I had in mind for this one. I wanted a subtle almond flavour so added some almond meal to the oats and the shredded coconut. I was very pleasantly surprised by the result. Not only did the almond meal add a subtle almond flavour, it also added the most amazing buttery creaminess.

That first bowl of this steaming oatmeal went down a treat!

This oatmeal is ultra creamy & delicious with subtle natural almond & coconut flavours. It makes a  warming & satisfying breakfast for those chilly mornings and as well as tasting great, the combination of almond, coconut and oats also gives extra staying power to your breakfast. I often end up feeling hungry by mid-morning but when I eat this Almond & Coconut Oatmeal it sees me right through until lunch time.

You might have seen on Instagram a little while ago that I was making almond butter (instructions for how to are with the picture which you can find here. Follow me while you're there if you don't already ;o))

That almond butter was made especially to go with this Almond Coconut Oatmeal which I had been dreaming about creating and eating for days. Serve it with a great big dollop of said almond butter and some fruit. Blueberries go well, as do bananas or cherries.

Upgrade your regular bowl of oatmeal to this ultra creamy & rich bowl of Almond Coconut Oatmeal gorgeousness and and I promise you won't be disappointed!

Let me know what you think in the comments below and share your pictures on Instagram or Twitter. I am @avirtualvegan. Use the hashtag #avirtualvegan on Instagram to be sure I don't miss them. 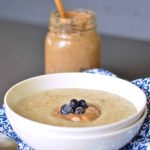 Use either homemade coconut milk (made from shredded coconut & water) or one from a carton like Silk or So Delicious I have not tried this with canned coconut milk. It is quite thick so if you do use it you may need to compensate by adding a bit of water too. You may use other non-dairy milk but coconut gives the best flavour and carries on the coconut theme. I also used coconut sugar to carry on the coconut theme but you could sub this for whatever sugar you have at home.

Tried this recipe?Rate it & leave your feedback in the comments section below, or tag @avirtualvegan on Instagram and hashtag it #avirtualvegan
« Coconut Lime Cake
Gingerbread Waffles »
1.1K shares