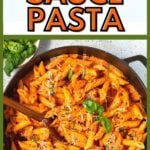 Vegan Vodka Sauce is ready in just 30 minutes with minimal prep. It's rich, creamy, packed with flavour, and because it's a dairy-free vodka sauce, no heavy cream is required. Toss through freshly cooked pasta for a delicious dinner!

You really can't go wrong when a meal involves piles of pasta, creamy, garlicky, tangy tomato sauce and vodka. It's definitely a win win kind of situation! And even though this Vegan Vodka Sauce recipe is totally dairy-free, it's so incredibly creamy and indulgent.

With an acidic, tomato-base, finished with rich cashew cream, and balance from the vodka which provides slight background heat and sharpness, it is so delicious.

Toss through some penne for a classic vegan Penne alla Vodka or use any other sturdy pasta of choice. It's even great with gnocchi!

Here's what's going on in this Vegan Vodka Sauce Pasta:

And a couple of ingredient specific notes:

Success tip - If you don't have a high powered blender soak the cashews in boiling water for 15 minutes then drain well, prior to making the cashew cream. This will ensure you get a beautifully silky smooth cream.

What Does Vodka Add To Pasta Sauce?

In vodka sauce or Penne alla Vodka, the vodka provides background heat and a slight sharpness which really balances the creamy tomato sauce. It also emulsifies the sauce, bonding the olive oil, tomato and cashew cream together to create a cohesive, super creamy, luscious sauce.

In addition it enhances flavour, just like salt does. Known as the “volatility effect”, alcohol bonds with both fat and water molecules, bridging the gap between our aroma receptors (which respond only to molecules that can be dissolved in fat) and food (which consists primarily of water). This is crucial, because most of the great flavour in our food actually comes from the aromas in our noses and not the tastes in the mouth.

How To Make Vegan Vodka Sauce

Making Vegan Penne alla Vodka is so easy! Here's how it's done:

Success tip - Pasta water! Yep, the starchy boiling water you cooked the pasta in. Before draining the pasta scoop out a mug full, then when tossing the pasta in the sauce, add a splash of the pasta cooking water. The sauce will become extra glossy and cling to your pasta better!

I love to serve my Vegan Vodka Sauce Pasta with HUGE amounts of vegan parmesan cheese, red pepper flakes and some fresh basil leaves. So good! Other great accompaniments include:

So let the P-A-R-T-Y begin...Here's to diving headfirst into piles of pasta with creamy, Vegan Vodka Sauce!

When reheating add an extra 2 teaspoons (10ml) of vodka per cup (240ml) of sauce for the full and fresh vodka flavour effect, and add a few drops of water to thin as necessary.

The good news is that most distilled spirits including vodka, are naturally vegan but the Barnivore website is a great resource for checking which alcoholic beverages are vegan if you aren't sure about a particular brand.

Is the vodka absolutely necessary?

Vodka sauce just wouldn't be vodka sauce without it! See my section above about What does vodka add to pasta sauce. If you'd rather not use it try this cherry tomato sauce instead.

What can I use instead of cashews?

Instead of cashews use ¾ cup (180ml) of any unsweetened vegan culinary cream or creamy canned coconut milk. 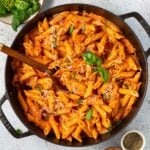 Success tip - Pasta water! Don't skip adding some of this as per my instructions. The sauce will become extra glossy and cling to your pasta better! Feel free to add a splash more vodka right before serving for a boozier sauce.  Leftovers & freezing - Transfer to an airtight container and store for up to 5 days in the fridge or for up to 3 months in the freezer. Leftover pasta (after being mixed with the sauce) will keep for a few days in the fridge too. Note that I don't recommend freezing pasta so freeze the sauce on its own and cook the pasta as needed. When reheating add an extra 2 teaspoons (10ml) of vodka per cup (240ml) of sauce for the full vodka flavour effect, and a few drops of water to thin if necessary. Allergic to nuts? - Instead of cashews use ¾ cup (180ml) of any unsweetened vegan culinary cream or creamy canned coconut milk.