Published: Oct 24, 2021 by Melanie McDonald · This post contains affiliate links · As an Amazon Associate I earn from qualifying purchases. · 4 Comments

JUMP TO RECIPE PIN
5 from 7 votes 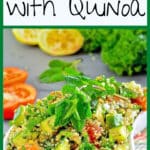 This recipe was originally published on February 23rd, 2016. I've since rewritten the post to include more helpful information and now I am republishing it for you. I hope you enjoy it. Thank you for following A Virtual Vegan!

There are so many delicious flavors and textures going on in this Gluten-Free Tabbouleh. It's tangy, bright and healthy and makes a great appetizer, side or light lunch. It's also fantastic for taking to potlucks, picnics and cookouts because it fares so well when made ahead.

If you are gluten-free and have been wondering what to substitute for bulgur wheat in tabbouleh, quinoa is your answer and is what we will be using in this recipe.

Tabbouleh is a simple Middle Eastern salad, sometimes known as tabbouli, tabouli, or taboulah. Traditional tabbouleh is naturally vegan but not gluten-free. It is usually made with lots of parsley, tomatoes, mint, onions and fine bulgur wheat then mixed and tossed with a lemon juice, olive oil dressing. Its exact ingredients can vary considerably from one region to another though.

Here's what you will be needing to make gluten-free tabbouleh, plus some ideas for substitutions:

Quinoa is a gluten-free, grain-free, nutrient-rich seed that is high in protein and easy to cook. It's often mistaken for a grain because it is prepared and eaten in the same way.

Quinoa seeds come from a plant called goosefoot which is closely related to amaranth, and although it is technically a seed it can be classified as a wholegrain because of its high fibre and protein content.

How to make Vegan Tabbouleh

Gluten-free and vegan tabbouleh is incredibly easy to make. First prepare the quinoa and allow to cool, then chop the herbs and veggies, shake the dressing together in a jar and then toss them all together. It's ready very quickly with little effort.

For the best results when making this vegan tabbouleh salad recipe take note of these tips:

Great as it is but feel free to make it your own by trying these variations:

Gluten-free tabbouleh can withstand more time in the fridge than your average salad which means that you can make it ahead of time if need be. It will last for 3 to 4 days and seems to even get better with time. Just store it in an airtight container in the fridge. It's easily transportable in lunchboxes or mason jars so is just perfect for packed lunches, picnics, potlucks and cookouts.

Serve gluten-free tabbouleh as an appetizer, side dish or a light lunch or dinner.

Traditional tabbouleh is not grain-free because it contains bulgur wheat which is a grain, however this gluten-free tabbouleh uses quinoa instead. Quinoa is a seed not a grain.

No. Tabbouleh is traditionally made from bulgur wheat which is a cracked wheat and contains gluten. When made with quinoa though it is gluten-free.

I have some leftover cooked quinoa. How much should I use?

To make this recipe you will need 3 cups of cooked quinoa although if you have less you can scale the recipe down to suit.

Can you buy gluten-free bulgur wheat?

No. Bulgur wheat is a type of cracked wheat and naturally contains gluten. Quinoa is a great gluten-free alternative in tabbouleh.

Love vegan salads? Be sure to check out these: 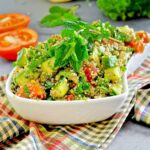 To cook quinoa on the stovetop

To cook quinoa in an Instant Pot