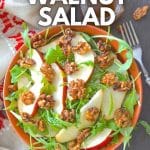 The red skins of the pears look so pretty against the deep green arugula and the pear juices seep into the dressing once the salad is mixed adding even more flavour. It's just a dream to eat.

How to make Pear Walnut Salad

This Pear Walnut Salad comes together very quickly and easily. The only cooking involved is making the candied walnuts. Here's how it's done in 4 simple steps:

What goes with Walnut Pear Salad?

Eat this Pear Walnut Salad as a side with your evening meal or with some soup for lunch. It can also be enjoyed on its own as a light lunch or dinner and it's perfect served up as a side or appetizer on your holiday table.

Try bulking it out by serving on a bed of green lentils tossed with some of the dressing, or serve it with:

Tips for making ahead

Fresh pears don't keep well once cut so it's best to make this salad just before you want to enjoy it. However, you can make the dressing up to a week ahead and store it in the refrigerator and candy the walnuts and store them in an airtight container. They will keep for a few weeks.

Are you supposed to eat the skin of the pear?

Yes. The skin is full of fibre which is really good for you. Also if using red pears, the skin adds a lovely colour contrast in this salad.

Why does the salad dressing separate?

It's natural for salad dressing with oil in it to separate. Oil repels other liquids and unless they are emulsified separation will naturally occur. Just give the dressing a good shake or whisk before pouring over the salad.

Looking for more tasty salads? You might also enjoy my:

This recipe was originally published on September 16th 2016. I've tweaked the post a bit and now I am republishing it for you. The actual recipe remains the same. I hope you enjoy it. Thank you for following A Virtual Vegan!