Published: Mar 12, 2020 · Modified: Feb 2, 2021 by A Virtual Vegan · This post contains affiliate links · As an Amazon Associate I earn from qualifying purchases · 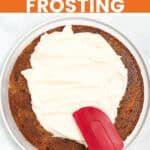 Vegan Cream Cheese frosting that is smooth as silk, decadently creamy, sweet and tangy. It's easy to make, spreads onto baked goods with ease, holds its shape when piped and has endless uses!

It's able to hold its own when being piped or sandwiched between cake layers and won't squirt out the sides and leave you with no filling in your cake.

For detailed measurements and instructions, see the printable recipe card.

Vegan Cream Cheese Frosting is not hard to make. Here's how:

Step 1: Beat the butter until soft, fluffy and creamy.

Step 2: Add the cream cheese and beat again until it is incorporated well into the butter.

Step 3: Add the other ingredients and beat until the powdered sugar is incorporated and the frosting is perfectly smooth and creamy.

Vegan cream cheese is different to regular cream cheese and has a higher water content. This means that when making cream cheese frosting it can become really runny if you aren't careful.

I found when testing this recipe that when you over-beat the cream cheese it becomes runny and once you hit that stage it's really hard to bring it back. Even adding more and more powdered sugar doesn't help much to thicken it. So lesson learned. Do not over-beat.

I start this recipe by beating the vegan butter on its own then introducing the cream cheese once the butter is soft and fluffy. That helps avoid the cream cheese being beaten too much. I also add some arrowroot powder. This helps soak up the moisture and keeps the frosting firmer. Then in goes a lot of powdered sugar. It is necessary to get a good, thick texture. Again though only beat a much is necessary to get it incorporated. Don't over-beat it.

It's also really important to not add any extra liquid to the recipe. There is 1 teaspoon of vanilla extract. That is all that can go in there. You can swap the extract for another flavor if you want to, but you absolutely cannot add more than 1 teaspoon of liquid total. Any other flavorings that you might want to put in there need to go in as powder, for example cocoa powder for chocolate cream cheese frosting or ground freeze dried strawberries for strawberry cream cheese frosting.

If your kitchen is particularly warm or you handle the frosting a lot then it can still start to get a little soft despite following my tips. If that happens just pop it the bowl in the fridge for 15 to 20 minutes, or the freezer for 5 minutes. You can also put the actual cake in there between each stage/layer of frosting if need be.

Can I pipe with it?

Yes you can pipe with this vegan cream cheese frosting but you won't get quite the same definition as you can with regular buttercream which is much firmer. For simple designs it is fine but for more intricate designs use buttercream instead.

You will have a much better outcome if you fit the piping bag with a tip, fill the bag with the frosting, then pop it in the fridge for 30 minutes before you attempt piping. You might also need to return it to the fridge during piping if it's particularly warm in your kitchen or if you have particularly warm hands.

By following these tips your frosting will hold is decorative shape much better.

How to use dairy free cream cheese frosting

Uses of this vegan cream cheese frosting in my life have included:

Making ahead and storage

Vegan Cream Cheese Frosting can be made ahead and stored in an airtight container in the fridge for up to a week. When you need it, take it out of the fridge for 10 minutes, then give it a quick beat with an electric mixer to fluff it up again before using.

I haven't tried freezing it because I suspect it would probably get a bit grainy and become too runny once defrosted.

Once it's been used and is on a baked item, it's best to keep it in the fridge

It's best to refrigerate any cake or cupcakes that have been frosted with vegan cream cheese frosting. That doesn't mean that you have to serve it cold though. Remove from the fridge an hour or two before you are going to serve so that the frosting and the sponge have time to come to room temperature before they are eaten.

Ways you can adapt this recipe

This vegan cream cheese frosting recipe is super delicious and works with just about any flavor but feel free to have some fun! Just don't add any extra liquid to flavor it. Not a single drop more. You can replace the vanilla extract with another flavor but anything else you add needs to be in powdered form.

So there we are. Go forth and slather it on everything! 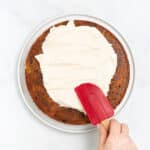 * BUTTER - Use a vegan butter that is on the harder side like my vegan butter recipe, Miyoko’s Butter or Earth Balance. Soft spreads like Becel and Flora make a much looser frosting and the cake won’t sandwich together without it squirting out the sides. **ARROWROOT POWDER – Sometimes called arrowroot starch or arrowroot flour. This really helps keep the frosting stable, thicker and firmer. You could use cornstarch instead but arrowroot works best and isn't detectable at all.  PIPING Fit the piping bag with a tip, fill the bag with the frosting, then pop it in the fridge for 30 minutes before you attempt piping. You might also need to return the bag to the fridge during piping if it's particularly warm in your kitchen or if you have particularly warm hands. Quantity This recipe makes about 3 cups of frosting, or enough to sandwich a 9 inch double layer cake and cover the tops and sides.

Tried this recipe?Rate it & leave your feedback in the comments section below, or tag @avirtualvegan on Instagram and hashtag it #avirtualvegan
1.7Kshares
Previous Post: « Vegan Mac and Cheese
Next Post: Pantry Recipes For When Your Fridge Is Nearly Empty »